What were the best 3 Romanian ads in January and February, according to ADC*RO 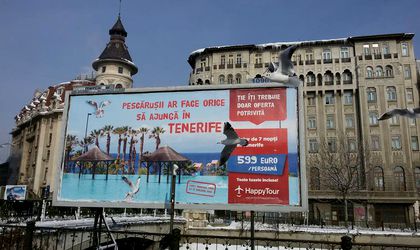 The Art Director’s Club Romania has started a new project aiming to promote and recognize the excellence in the Romanian creativity. Therefore, each month, ADC*RO members will chose the top 3 most creative campaigns launched in that month.

In January, the first place went to Publicis Romania with the campaign Shop like a Jedi, created for Carrefour. Secondly came “Where’s Mr Applehead” campaign, for the client Strongbow by agency Ogilvy&Mather. The third place was awarded to agency Fund Done for an outdoor campaign for tourism agency Happy Tour.

Some of the campaigns that were also noted by the club in January were: BRD – Maria, Grolsch – Fata-n fata cu Class, Fibra – Droga vs Boguski and Primus – The philanthropists.

In February, the first position went to McCann Erickson with the campaign Go Mono for Radio 21. Lowe Profero takes the second place with the Valentine’s Day activation for Orange, My Heartbeats App, while the third stop is awarded to the newly launched agency The Temple, with the 360 stop motion movie, Grolsch Creative Metamorphosis.

The other campaigns that were noted by the jury in February were Vodafone – Manifesto, Pepsi – 50 de ani de spirit liber and Therme Bucuresti – Flashmob with the Symphonic Orchestra.

“We want to bring together the agencies in Romania and we learn to be happy for our colleagues’ work, not forgetting to show our appreciation also for the clients that have the courage to adopt beautiful creative solutions. I am looking forward to see what campaigns come up in March and the rest of the months of this year and I wish the best of luck to the creative teams, in gaining the distinction of ‘Team of the Year’,” said Eugen Suman, creative director of Kubis Interactive and president of ADC Romania.