What is there to do this weekend in Bucharest?

This weekend is full of interesting one-time events happening all over Bucharest, from movie festivals to Broadway musicals, making it the perfect time to get out of the house and enjoy the sunny weather before the winter holidays come knocking on our doors.

The “Empathy Collection” charity event, an art expo followed by an auction of art made by young Romanian artists, is a two-day event organized for the victims of the Colectiv fire and it ends today, the 4th of December, at 22:00. If you have the time and would like to start your weekend off with paintings, sketches, photos, handmade jewellery, a concert or a poetry performance, make sure to drop by the ArCuB tea room.

One other event not to be missed this weekend is Disney’s Beauty and the Beast musical, coming to Bucharest straight from the stages of Broadway as part of their 20-year anniversary international tour. From Friday to Sunday, the shows will be taking place at the Romexpo center, played in English with Romanian subtitles.

The National Opera House hosts this weekend the premiere of DSCH. The Dream ballet, which will have worldwide known ballerina Alina Cojocaru as a special guest for the December 5 performance. The latest ballet performance is a mix between Alexei Ratmansky’s choreography on Dmitri Shostakovich’s music and the magic of Sir Frederick Ashton, based on William Shakesperare’s play “A Midsummer Night’s Dream”.

Jazz drummer and Oscar winning Birdman score composer Antonio Sanchez and his band Migration will perform for the first time in Romania this weekend, on December 6 at the Radio Hall. For jazz lovers, the Mexican drummer’s name is already known, even before his all-percussion soundtrack was featured in Alejandro González Iñárritu’s Oscar-winning, 2014 indie drama about a washed-up superhero film star taking a shot at a Broadway play. Sanchez got his start at age 5 in Mexico City, studied at Berklee College of Music and the New England Conservatory of Music in Boston, and by the 2000s was playing with Pat Metheny, Chick Corea, Michael Brecker and Gary Burton, among others. Tickets are available in Eventim network and are priced between RON 95 to RON 155. 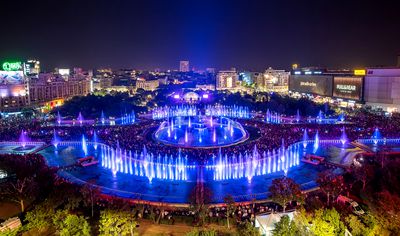 In terms of music, the Bucharest city hall is organizing the “Silent Night” concert through creart – The Bucharest Centre for Creation, Art and Tradition. The productions will take place at the Teatrelli theatre and will come to a close on the 7th of December. Until Romanian vocalists will be performing famous Christmas songs, interpreted in an original style, every night from 19:00 – 21:00.

Also this weekend, the 2Cellos duo made up of Luka Sulic and Stjepan Hauser, the so-called “orchestra-men”, are returning to Romania for a performance on the 6th of December at the Sala Palatului. Originally from Croatia, the two have garnered international acclaim and are said to have given a new dimension to the classical, pop, rock and electro music genres.

The Polish Film Days will be ending on Sunday as well, but there are several last-minute screenings at the Elvira Popescu cinema. These include “Warsaw 44”, “The Photograph” and “The Citizen”, three of the most interesting movies made in Poland in the past few months. All movies will have Romanian subtitles.

Also on the movie scene, this weekend “Victor Frankenstein” and “In the Heart of the Sea” will be premiering at the cinema, but also “Krampus”, a Christmas-themed comedy, and “The Little Prince”, an animated version of Antoine de Saint-Exupery’s famous novel.

Finally, if you haven’t had the chance to see it yet, this year’s edition of the Bucharest Christmas market is still taking place in Piata Universitatii, and will continue throughout the month. With sixty little huts where visitors can purchase traditional objects, painted ceramics, wooden carvings, traditional costumes and masks, wooden toys and musical instruments, hand painted Christmas decorations, as well as enjoy a variety of traditional Romanian food, the Christmas market is definitely worth a visit. While there, make sure to check out Santa Clause’s house!