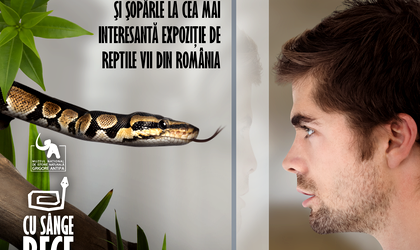 The week seems to be going out in style, preparing for the spring hour change. And although the weather doesn’t seem to want to reflect the presence of said season, that doesn’t mean we should give up, especially when there are so many last trains to catch!

This weekend is the last chance to enjoy the events within the One World Film Festival, taking place between March 21 and 27 at Cinemateca Eforie, Cinema Elvire Popesco, Cinema Union and the Hollywood Multiplex

For this year’s edition, the international human rights documentary film festival offers 53 movies in nine categories, which will be screened in the various locations.

“Documentary, as a film genre, is resting on edges, and lays there, where fiction borders journalism, where the experimental borders sound civic-mindedness. This being in-between borders, specific to non-fiction film, is perhaps the reason why documentary is so well-equipped to talk about frontiers. The genre itself essentially migrated towards ever more hybrid territories. The power of the documentary genre resides in its mobility, hard to constrain by definitions, in the fact that it swiftly absorbs the most cutting edge online tendencies, as it ventures in the landscapes of video games and already took off in the dizzyingly unknown space of virtual reality. Through our festival’s events, we also tried to paint a comprehensive portrait of these emerging adventures beyond any sort of established or expected borders,” explains Ada Solomon, the festival’s director, in the introduction of this year’s festival booklet.

For thrill lovers it is also the last weekend to visit the In cold blood temporary exhibition of live reptiles that will close on May 1.

The Australian Taipan, the Egyptian cobra, the giant African viper, anacondas, rattlesnakes, the spittoon snake or royal cobra are just some of the species that can be seen in this exhibition at the Antipa Museum. The exhibit offers an insight into the world of these mysterious creatures and gives information about their habits, how they are adapted to the environment, and the role that they plays in the ecosystem.

Visiting hours are between 10 and 19 during the weekend, and the entry fee is RON 10 for children, students and pensioners and RON 15 for adults.

Bicycle lovers have a special event dedicated to them between March 25 and 27, the Bicycle Salon, taking place at Romexpo. The event will include, beside exhibited bikes, skill competitions for cyclists, children, but also for mechanics.

The newly launched Point art hub offers three theatre performances and a graphics exhibit for the end of this week. Access to the venue is allowed either through a membership card or through a ticket bought for one of the events.

On Saturday, NSFW takes a close look at “power games in the media world where sex sells anything, anytime, in an age of Photoshop, of internet exhibitionism and unemployed university graduates.”

On Sunday Tudor Prodan will take the spotlight with his graphic exhibit INTROVERT PERVERT, event which will coincide with a new interpretation of Tennessee Williams’ The Glass Menagerie, for which he signed the scenography.

Anyway, with all the interesting things going out these days, don’t forget to change your clock on Sunday, so you can start the week just right!