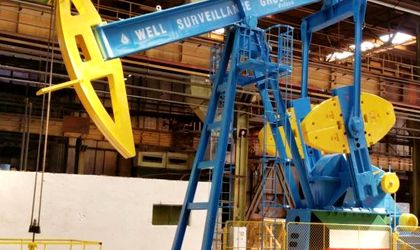 Vulcan plant in Bucharest inaugurated the largest pumping unit for oil production in Europe and has concluded a contract for the delivery of 200 units in the Middle East, according to Mediafax.

“We are opening in a new range of products because we operate in markets that require these products. We want to capitalize Vulcan history throughout Europe but also in Eastern Europe. With this machine we proved that Romanian industry is able to function and become competitive in major international markets. In terms of the contract with the Middle East, it is for EUR 22 million, but it may exceed this amount. Thirty percent of the units have already been delivered. The “Arab Elephant” is the trade name under which the unit will be sold in the Persian Gulf , which is 100 percent Romanian oil equipment. Also, later this year we will participate in two auctions in Kuwait and Oman, this machine making the head of the list,” said CEO of Vulcan SA, Remus Vulpescu, stressing that Vulcan has not made new investments for many years.

Vulpescu stated that Vulcan has invested EUR 350,000 from its own resources in research, development and testing of this prototype.

“The unit was built specifically for large deposits of oil fields. Maximum operating depth is 4,000 meters. It can extract 1,000 barrels of oil per day, with an energy consumption of only 60 kWh/h, meaning a 30 percent increase in productivity and increased energy efficiency of 30 percent compared to our previous flagship,” the Vulcan representative said.

Vulcan SA currently has 560 employees, after laying off half the staff, but company management said that in less than one year they will total 1,200 employees.

“The production capacity of the company has halved, because the number of employees was reduced by half. We already reinstated 50 of the employees were fired, and within a year we want to employ more, aiming to reach 1,200 employees,” said Vulpescu.

In the next three to five years, Vulcan targets to have external sales at 75 percent of its turnover. For its energy production equipment, Vulcan prioritizes countries in northern Europe, recognized for the advanced level of science and technology, quality and environmental standards and energy policy, while for oilfield equipment it plans on strengthening its presence in the Persian Gulf, eastern Europe and South America.

Existing contracts cover 85 percent of the current production capacity of the plant for the next 9-12 months.

Vulpescu estimated that Vulcan will achieve a turnover of RON 25 million this year. This fall, the company’s reorganization plan should come into discussion. Vulcan Bucharest, a company controlled by businessman Ovidiu Tender, became insolvent in 2013, having Euro Insol as judicial administrator. Since 2003, the company is part of the Tender group.

Company officials say that the lack of coherent national policy of recovery of the industry, the global crisis, delayed investment in technological modernization of the Romanian energy sector and other causes forced Vulcan’s entry into insolvency in May 2013 with unpaid debts of about EUR 55 million at the time. Its main creditors are the Romanian Commercial Bank and the National Agency for Fiscal Administration.

With over 100 years of activity in Romanian industry, Vulcan plant in Bucharest has shipped over 25,000 pumping oil production units in about 25 countries on 5 continents. Also, Vulcan is the manufacturer of industrial steam boilers in Romanian power plants including Turceni, Rovinari, Craiova, Deva, Drobeta-Turnu Severin, Oradea, Iasi, Brasov and Constanta.