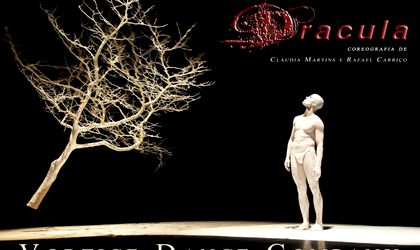 The Portuguese Vortice Dance Company will present their Dracula show to Romania this September during George Enescu festival. The show is a reinterpretation of Dracula’s myth and it will be staged at the National Opera in Bucharest, on September 16, 19:00. The event is sold out, but those interested can still find tickets at Grand Cinema Digiplex, where it will be a live transmission of the show.

Portugal’s Vortice Dance Company was created in 2001 by directors and choreographers Claudia Martins and Rafael Carrico. For the Dracula show, the two choreographers have used several sources of inspiration, from Bram Stoker’s horror novel with the same title, to legends and myths from different cultures.  The show is a luxurious visual tale about submission and domination, featuring music by Philip Glass, Serghei Rachmaninoff and even Lou Reed.

For the making of this play, Dracula, both choreographers Claudia Martins and Rafael Carriço drew upon an extraordinary wealth of sources, besides the literary masterpiece with the same title by Bram Stoker, written at turn-of-the century, late-Victorian Britain. Newly created characters and others such as Baroness Bathory, further legendary tales, myths and fears that still haunt us today, they all served as mottos for their enormous creativity. Moreover, all these features share a cunningly sown thread, which lead audiences to the fabulous and utterly enigmatic world of horror.

The beginning of the play is rife with highly suggestive ideas taken from the novel’s original course of action entangled with new and renewed ideas, which mysteriously swerve from it. Also, through the exploration of new languages, it conveys a mystical atmosphere of suffering, hallucination, fury and loss.

Ever since the prince, Count Dracula, absented himself to the war, Princess Elisabeth’s sleeping was so vastly tormented by dreadful nightmares of terror and blood that she threw herself into the river. Her death caused him sincerely and profoundly heartfelt grieving and made him feel hungry for vengeance. The gentleman who once had great capacity for loving turned himself into a vampire of darkness: “I seek neither youth nor glee, nor even the voluptuousness of the shining sun and the babbling brooks which are pure delight for the young and fortunate”. [Dracula]

As the plot of the play unfolds, Dracula becomes an essentially manifold character bearing different forms, changing faces, turning himself into various animals and growing into different body shapes which are nonetheless present in Today’s world. Thus, the essence of that evil being, alongside that of many other characters, is brought into contemporary life through a critically contextualized exploitation of many sorts which seek to portray the many ways through which both the lurid dark and sensuously perverted sides of the self, or even pure love turned into tragedy may awfully overwhelm us.