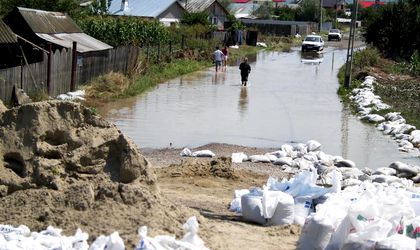 A team of eight volunteers from Northern Ireland are working to rehabilitate houses for flood victims in Cudalbi, Galati County affected by massive flooding in September 2013.

The rehabilitations are part of the program “Good Deeds in Hard Times,” initiated by Habitat for Humanity Romania. Made possible with the support of JTI Foundation, a Swiss-based charitable organization, 60 families will have a completely renovated house or the floors and walls repaired.

“We chose to come to Romania to give a hand to the flood victims who lost all their savings and who don’t have a place to live. We wanted to be part of the impact Habitat for Humanity has in the world and in Romania,” said Peter Dolan, one of the volunteers.

The massive flooding in September 2013 had affected 18 towns in Galati County, of which Cudalbi was the hardest hit. Two people died, 500 houses were flooded and more than

3,000 residents were affected. Habitat for Humanity Romania intervened from the beginning by supporting the residents in the reconstruction process after the disaster.

The organization continues to help the victims from Cudalbi, through the program “Good feeds in hard times”. Made possible with the support of JTI Foundation, a Swiss-based charitable organization, 60 families will have a completely renovated house or the floors and walls repaired.

The program “Good deeds in hard times” started in January 2014 with the assessment of damage and repairs needed and with the selection of beneficiaries. The program will end in June, with the strengthening of foundations and walls, flooring application, repair or replacement of heating systems doors or windows. Habitat for Humanity Romania is also involved in the community through an educational component.

“Good deeds in hard times” is implemented by Habitat for Humanity Comăneşti affiliate and is part of the national program Disaster Risk Reduction and Response (DRRR), developed in 2005.