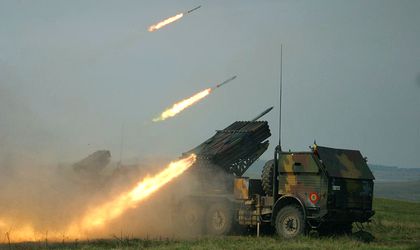 According to Voice of Russia, Romanian military units are moving towards the eastern borders – a military echelon loaded with anti-aircraft guns, trucks and ground -to- air missile systems has moved via Bucharest towards the Black Sea port of Constanta.

The military units are needed for conducting joint military exercises with the participation of the US servicemen and four American F-16 fighter jets, according to the Romanian Defense Ministry officials told newsmen.

“The maneuvers will be held in compliance with the plan on strategic partnership existing between Romania and the US,” Romanian Minister of National Defense Mircea Dusa announced.

Earlier Latvia, Lithuania, Poland, Romania, and Estonia asked NATO to strengthen its military presence in their countries because of the Ukrainian crisis. At the same time, Romanian President Traian Basescu satisfied Washington’s request to increase the number of marines on the NATO air base in Germany from 1,000 to 1,600. In addition, the Romanian authorities asked Washington to deploy a squadron of US fighter jets on their territory to remain patrolling the skies until 2017.

Voice of Russia also mentions that a number of Romanian political analysts believe that in light of the events in Ukraine, Bucharest must be well prepared for bringing its troops into the territories of the Odessa and Chernivtsi regions.

BNR governor Mugur Isarescu and prime-minister Victor Ponta both commented on the economic risks associated with the Ukrainian crisis in Romania’s case, both officials deeming them “manageable”.

Romania will raise the defence ministry’s 2014 budget by 700 million lei ($217.41 million), or 0.2 percent of national output, Prime Minister Victor Ponta said on Monday, quoted by Reuters who also emphasizes the fact that the announcement came as tensions continue to build in neighbouring Ukraine after Russia’s annexation of Crimea.

Romania has agreed a fiscal budget deficit target of 2.2 percent of gross domestic product this year under the terms of a 4 billion euros aid deal led by the International Monetary Fund.

Higher defence spending would raise the ceiling, as would government plans to slash employer taxes to the social insurance budget. An IMF mission is expected in Bucharest later this year.

“We will supplement this year’s defence ministry budget … by roughly 700 million lei, or 0.2 percent of GDP,” Ponta told reporters. He added troops will get better technical equipment, with upgrades done mostly in Romanian defence plants.