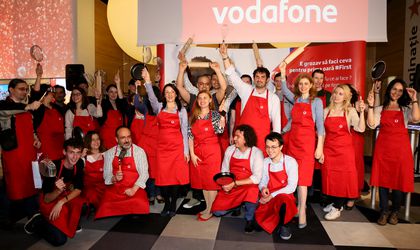 “Vodafone Firsts” is the new global brand program, launched at the beginning of this year, through which Vodafone aims at inspiring people to do something remarkable for the first time, using mobile technology.

In June, Adrian Hadean, blogger and passionate chef,will travel around the country and will share the experiences, recipes and stories gathered during his journey, through social media channels.

The recipes will be collected in the “Taste of Romania” mobile app, powered by Vodafone, which will be available for all users including the roamers to Romania.

“The flavor of Romania will be “caught” in the mobile app named ‘Taste of Romania’, available for free download to all users. This initiative is the first one from a series of Romanian premieres that will be launched as part of Vodafone Firsts program. At the same time, today we are launching the global initiative “Pitch your First” that invites Romanians, together with people from 9 other countries to share their dream on www.firsts.com in the attempt of making it come true with Vodafone’s support”, said Laura Barbu, brand & marketing communication director, Vodafone Romania.

Romanians who have a compelling First idea will be able to share their ambitions at www.firsts.com, from May 14th – August 15th, by simply filling in an online form. Further on, Vodafone judges will select 10 shortlisted finalists in each country: the shortlist will then be put to an online public vote, with one winner in each market seeing their dream become a reality.

All 10 winners will be publicly announced in October, 2014. The prize will consist of financial support for fulfilling the winner’s dream as well as of shooting a documentary movie that will be promoted on Vodafone Romania social media channels and on www.firsts.com

To promote “Pitch your first” competition, Vodafone is projecting the “Lifies” movie in public spaces from many countries, including Romania.

The special projections are made on iconic buildings such as Kulturbraueri in Berlin, National Theater in London or the Piarist High-School in Budapest.

Romanians will also be able to watch the “Lifies” movie, that will be projected on the National Theater building in Bucharest, on Monday, May 19th, from 21 to 23:00.

“Lifies” is capturing the expressions of 53 people, as they experience their First. Among the stories presented, the movie also depicts the experience of a Romanian child – Rares Chirita, a 6 years old boy, who is riding a horse for the first time.

Vodafone is also encouraging people to video their own reactions using a smartphone or tablet front-facing camera as they achieve something amazing for the first time.