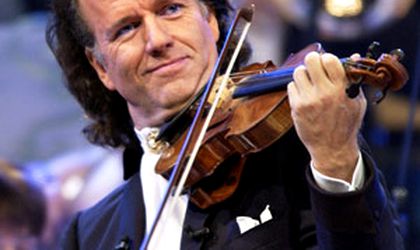 Violinist Andre Rieu, dubbed the King of Waltz, will be in Bucharest next week, on December 9th, for a press conference previewing his 2015 concert in the country. The concert will take place in Bucharest alongside the Johann Strauss Orchestra.

Born in Maastricht, Rieu is one of the best-selling musicians in the world. The Dutch violinist, conductor, and composer has sold over 2.5 million CDs and DVDs in his home country and over 40 million throughout the world. He is known for his desire to make classical music more accessible and has often succeeded this. His “Second Waltz” stayed in the top 10 of his country for a whole year.