US businesses call for predictability on local investment scene 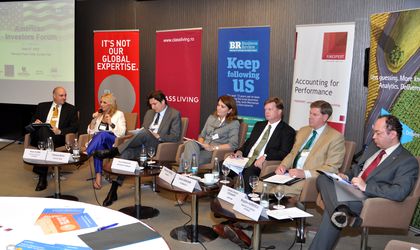 Agriculture, IT&C, the automotive sector, defense and energy are some of the most important growth sectors awaiting investment in Romania, but if they are to prosper they need more predictability and policy that doesn’t harm investors, said business community representatives who attended the fourth edition of the American Investors Forum organized by BR last week.

The US and Romania reached a new broader and deeper stage in their bilateral relationship last year after a joint declaration on strategic partnership for the 21st century was signed in Washington, along with the agreement on the deployment of the US ballistic missile defense system in Romania, according to Bogdan Aurescu, state secretary in the Ministry of Foreign Affairs.

Aurescu said the two countries have an excellent political partnership, while military and strategic cooperation, including intelligence, is well developed, although the economic area needs further improvement.

The state secretary added that financial exchanges between the two countries reached USD 2.3 billion at the end of 2011, while the value of American investments in Romania came close to USD 970 million, making the US the twelfth largest foreign investor in the country.

“Romania has everything going for it: You have the Black Sea ports, you’ve got the Danube River, you’ve got incredible agricultural potential, you have non-ferrous metals, you have energy, an educated population and the second largest land mass and population in Central and Eastern Europe. It’s up to the government to put in place policies that maintain a certain level of transparency and also predictability,” said James Daniel Stewart, vice-president at Raiffeisen Bank and board member of the business advocacy group AmCham.

Camelia Sucu, owner of Piata de Gros, a wholesale market for agricultural products in Bucharest, said that Romania has 9.6 million hectares of agricultural field and not all is currently used. “We have great potential due to the quality of the soil. We have a lot of people working in agriculture abroad willing to come back, if they now have the same salary as in Poland or Spain,” said Sucu. Apart from the natural resources, Romania boats skilled human resources which have convinced large American corporations such as General Electric, Microsoft and Emerson to gain a significant foothold in the country.

“We are putting our outsourcing centers here to serve other countries, and I am very proud of it as the one we set up in Romania is of the best quality in Europe. This is why we are investing more and more,” said Ronald Binkofski, general manager of Microsoft Romania.

Binkofski added that the unique intellectual property behind a company can attract the attention of foreign investors.

Politicians are talking about turning Romanian into an outsourcing center for the world but this will only prove that the country is not competitive in its own right on the international market, according to the Microsoft GM. Creating jobs in a tough economic environment is a challenge for all countries, but Romania is trying to tackle it through a state aid scheme that grants money to companies that are investing and creating jobs locally. The state aid scheme in Romania is regulated by government decision no. 1680/2008 and runs through to the end of 2013, with a total initial budget of EUR 1 billion.

“Up to now 24 companies have been granted state aid for investments of EUR 1.3 billion, creating 6,300 new jobs. This scheme is available until the end of 2013 and 60 percent of the funds are still available,” said Manuela Furdui, managing partner at Finexpert accountancy. The firm’s portfolio on approved incentives stands at EUR 117 million, and includes companies such as Pirelli Tyres Romania and Lufkin Industries.

Companies that want to apply for state aid need an investment larger than EUR 5 million that creates more than 50 jobs, according to Furdui.

Investors who consider Romania a good business destination may gain further trust in the country from a security point of view, as it will have an operational missile defense shield from 2015. The US will award contracts worth USD 350-400 million for the building of the base in Deveselu, Dolj County, and Romanian companies are able to take part in the building effort, according to Aurescu. “An enhanced level of national security means a safer and more attractive business environment,” said Aurescu.

Clearing the fog of uncertainty

Romania is certainly looking good from a broader perspective, given its natural assets and potential in many sectors, but foreign investors established here believe that more needs to be done in order to make businesses run more smoothly.

“The saddest thing to see here is that there is tremendous potential, but sometimes things are broken, and sometimes someone wants it that way. And that’s what’s got to change. A foreigner can’t do it for Romania. I want to see it succeed. With just a few small changes it could do so much better, but we can’t do it for them,” said Keith Kirkham, senior commercial officer of the commercial section at the US Embassy in Bucharest.

The recent insolvency of Hidroelectrica, the state-owned power producer, came as a shock for the business community, and is the clear evidence of unpredictability that may scare investors, said the event speakers.

“What people I think did not realize is that for a company in insolvency – and Hidroelectrica has around EUR 800 million in outstanding debt – the banks have to provision 100 percent of that, which in some cases could virtually wipe out the capital of the bank,” said Stewart at Raiffeisen Bank, which is not exposed to Hidroelectrica.

The unpredictability is also eating into the value of state-owned companies that are planning to sell minority stakes in the near future.

Stewart said that investors in London were willing to buy shares in Petrom, Transelectrica or Transgaz, but they were asking for a massive discount that wouldn’t allow the government to sell at that price.

Investors looking to do business in Romania should carry out a due diligence process in order to know who their potential partner is, while not forgetting to look thoroughly at the books, concluded the panelists.