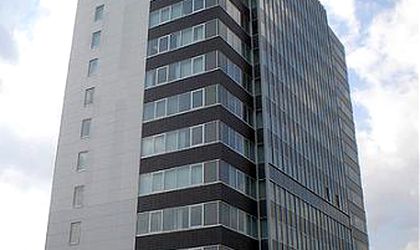 Uniqa Real Estate Management, a subsidiary of Austrian insurer Uniqa Group and the manager of the company’s real estate portfolio, has completed the refurbishment of Floreasca Tower, the 7,600 sqm office building it owns in northern Bucharest, the company announced on Wednesday. Now the company plans to have approximately half of the building leased by the first quarter of next year.

The class B+ building was delivered in 2005 and has been previously known as Oracle Tower as the IT giant has been its main tenant until this March. Oracle canceled its lease contract in early 2014, two years ahead of its expiration and relocated to nearby Floreasca Park.

Now the building has five tenants – Romenergo, Raiffeisen Evolution, Gorenje, Fata Group and City Grill which runs a restaurant on the ground floor. Uniqa Real Estate is presently negotiating several other leases and estimates that by early 2015 a half of the building should be leased and the other half by the end of the year at the latest, said Heinrich Reuss, head of asset management CEE at Uniqa Real Estate Management. He added that there have been offers to sell the property but the company is not considering this option and wants instead to take advantage of the “growing business in the area”.

Moreover, although there are no concrete plans at present, Uniqa Real Estate Management is interested in buying more properties in Bucharest over the following period as the city offers higher yields and overall a more attractive perspective than other regional capitals such as Warsaw, he went on. In addition to Floreasca Tower, the real estate company owns another 3,500 sqm office building in the area which is bought last year and which headquarters the insurer’s local operations.

Uniqa Real Estate Management bought the Floreasca Tower in 2005 from Raiffeisen Evolution and Strabag for an estimated EUR 20 million. At that time the building was one of the first office buildings developed in the Floreasca neighborhood which has since grown to become one of the top business destinations in the city. The building is located close to the Aurel Vlaicu metro station and several other more recent and larger office developments.

The building’s refurbishment costs stood at around EUR 100 – EUR 150/sqm and the headline rent in the project is presently EUR 14/sqm/month to which a EUR 3/sqm/month service charge is added, according to Uniqa Real Estate Management representatives.

Uniqa Real Estate Management manages some 370 properties valuated at EUR 2.5 million. Out of this, approximately 10 percent is invested in CEE.