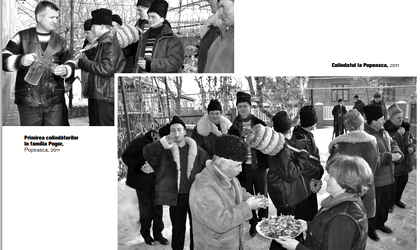 According to Mediafax newswire, last March, the Romanian Ministry of Culture signed the documents necessary to submit three candidacy files for the Intangible Cultural Heritage of Humanity List to the UNESCO Convention for the Safeguarding of Intangible Cultural Heritage Secretariat. The three files referred to the customs of Men’s group Colindat in Romania and the Republic of Moldova, pilgrimage at Sumuleu-Ciuc, and pilgrimage at Moisei Monastery on Great St. Mary’s Day (The Assumption of the Virgin Mary into Heaven).

For describing the traditional action, UNESCO notes that on Christmas Eve, groups of young men in villages throughout Romania and the Republic of Moldova go from house to house performing festive songs. The songs have an epic content, which is adapted to each host’s individual circumstances. The performers also sing special, auspicious songs for unmarried girls, to help them find a husband within the next year. After the performance, the hosts offer the singers ritual gifts and money. Colindat plays an important role in preserving social identity and cohesion.

There were 12 nominations to the Urgent Safeguarding List and 31 nominations to the Representative List. So far, Romania features on the Intangible Cultural Heritage of Humanity List with the Calus ritual (introduced in November 2005), Doina (October 2009), and Horezu ceramics (December 2012). More about this group, here.