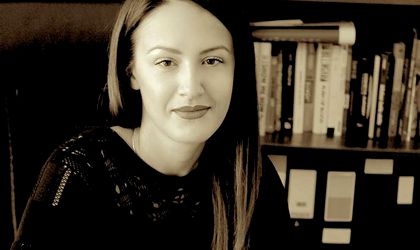 Coloring books for adults have become the latest trend, being considered a stress-free activity that relaxes both brain and body. Litera Publishing House has recently launched a special series of adult coloring books, based on the bestsellers that illustrator Johanna Basford has created. Business Review talked with Cristina Sturza-Vidrascu, the editorial director of the publishing house, to find out more about this relaxation technique.

Why a collection of coloring books for adults?

For adults, to color means an anti-stress activity which in recent years has rapidly gained ground abroad, where they organize even coloring clubs and also have interactive communities in which members share their drawings and videos with the process of creating them. This kind of books, which were recently published by Litera Publishing House, Secret Garden / Gradina secreta and The Enchanted Forest / Padurea Fermecata, were greeted everywhere with an unexpected and huge appetite. Given that, in our society increasingly agitated, Romanians are interested in finding ways to relax and coloring books are a low-cost option, available to everyone and very pleasant.

Coloring as a relaxation technique is not new, the first of psychologists who have used it was Carl G. Jung in the early twentieth century. When we color, we activate both hemispheres of the brain, because this action uses both logic, by coloring forms, and the creativity, by combining colors.

Coloring books help adults to isolate themselves from the everyday noise and allow the mind to calm down. We really need that in these very demanding times. Of all the ways to relax, to color awakens the imagination and also takes us back in time to the carefree childhood.

Why did you choose to publish the books made by illustrator Johanna Basford in Romania?
The Scottish Johanna Basford is, at this moment, the most famous author of coloring books, those published by us being translated into 14 languages and sold over three million copies worldwide. Johanna illustrations are appreciated by many people due to her unmistakable style – it hides details in the drawings. All her designs are handmade in ink.

Shortly after the appearance of books in the UK, Johanna Basford began to receive thousands of photos with colorful pages of them, which inspired her to make a gallery on her website, thus creating a large online community.

I read that Johanna Basford needed nearly two years to convince her bosses to publish the coloring book for adults. How much time did the negotiations for this series last for your publishing house?
We quickly decided to publish these books, there have been no debates regarding the publication because by the time the coloring books have captured our interest, they had become bestsellers. Although they are still rare books on the market in Romania, given the growing interest in the relaxation methods, we didn’t question that the phenomenon will not catch locally. Of course, the editorial decision took into consideration both sales figures and intuition.

How many orders did you receive for Johanna’s series until now?
Since we launched the series almost a week ago, it is premature to talk about numbers. But we did publish 3,000 copies per title and we distributed all of them. Regarding sales, we aim to publish another edition until the end of the year.

Do you have any marketing strategy for selling these books?
Marketing tactics used for this project focused on the buyer’s experience with the product. We created several large panels with illustrations from both books to be colored by those who wanted. The panels were placed in various bookstores, parks, and also outdoor libraries. Also, the panels were present at several events and a TV show.

In online, we developed an app on Litera’s Facebook page, where we invite all the participants to express their creativity by coloring the illustrations Johanna Basford. Those who enroll can win weekly a copy of the two books, Secret Garden and The Enchanted Forest. In two weeks, we received over 300 drawings.