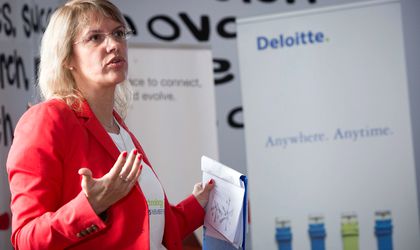 Thirteen Romanian companies have been included in Deloitte’s Technology Fast 500 ranking 2015 for Europe, the Middle East, and Africa (EMEA), accounting for about one-fifth of the total number of finalists coming from Central Europe.

The highest placed in the ranking is media company ZebraPay, with an average growth rate of 998 percent during the past four years (2010-2014).

As compared to the regional Fast 50 ranking launched in October 2015, three new companies from Romania have entered the ranking: Accesa IT Consulting, dcs plus and Gama IT.

“Achieving a position in the EMEA Fast 500 is always an impressive feat but the rates of growth for this year are particularly inspiring. I would like to congratulate all the Romanian companies whose results highlight the strength and determination of the technology sector in the country,” said Alina Mirea (in picture), partner Deloitte Romania and Fast 50 country leader.

France again dominated as the country with the most entries in the top 500 overall for a fifth consecutive year, while the rest of the top 5 represented countries are rounded off by the same locations as 2014 including the United Kingdom, Norway, Netherlands and Sweden.

Two Israeli companies featured in the top 5, and 4 of the top 10 ranked companies are from the United Kingdom.

The software sector represented 52 percent of the overall rankings on this year’s Fast 500, followed by the media sector with 18 percent. Rounding out the sector list is communications (10 percent), hardware (10 percent), life sciences (6 percent) and clean technology (4 percent).

Overall, the EMEA region saw a 1,012 percent average rate of growth in revenue, with companies from over 20 countries featuring in the rankings.

Entrants in the ranking may be either public or private companies but must be a ‘technology company’, headquartered in EMEA.