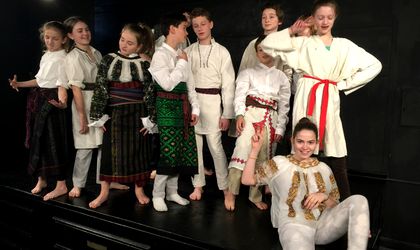 Black&White – The adventures of Harap-Alb, a theatre play translated by Vasile Flutur, will come to the stage of the Romanian Cultural Institute in New York on July 23, 2015, according to representatives.

The play is an adaptation of the Romanian fairy tale Harap-Alb’s story by Ion Creanga. It is directed by Adrian Bulboaca and Vasile Flutur and it lasts one hour and twenty minutes. Language used is English, 18 children will be its protagonists and the costumes are traditional Romanian wear.

The music used within the play is original, especially composed by Arthur Solari, winner of the Drama Desk prize for the music in Tamburlaine.

Two other representations are scheduled for the play, on July 22 and 25, at the Old Stone House in Washington Park of Brooklyn, New York.

The show is the result of a collaboration between the Romanian Cultural Institute in New York and Piper Theatre Productions. Vasile Flutur has been working with them since 2010 as actor, director and professor. Each summer, the Piper Theatre Productions host an intensive children theatre season. Within these seasons, Flutur managed the “Shakespeare lab”, directing Twelfth Night (2012), Hamlet (2013) and Pericle (2014).