The Rhodope Mountains: a journey into undiscovered Bulgaria 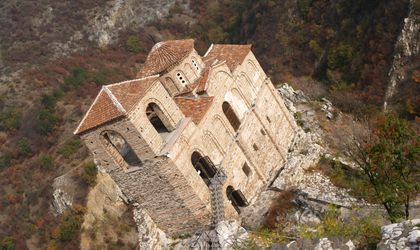 While Bucharest-based holidaymakers are regular visitors to Bulgaria’s Black Sea Coast and ski resorts, the Rhodope Mountains, which straddle the border with Greece, are much less well known. After you’ve packed away your skis for the year, take a trip off the beaten track to this less travelled corner of the Balkans. BR took in some of the highlights.

This lofty medieval fortress is today a peaceful spot – though it does, rather incongruously, advertise Wi-Fi! Perched atop a ridge, it affords superb views over thickly coated mountain terrain, with the Chepelare River running through it. Artifacts unearthed at the site indicate that the area was inhabited as early as the Thracian era, though the fortress was rebuilt in the 13th century. Near vertical drops created by the dramatic massif surroundings rendered the remote castle impregnable on three sides, and it played an important strategic role during the Crusades. Over time it passed through the hands of the Thracians, Romans, Byzantines, Crusaders, Bulgarians and Ottomans.

Today the fortress itself is in ruins, but the site hosts the 12th-century Church of the Holy Mother of God, in far better condition – partly thanks to reconstruction in 1936 following an earthquake. Back in use as a place of worship since 2008, it is full of character, but the chief draw is the fragments of 14th-century frescoes featuring saints and biblical scenes – you’ll need to understand Medieval Greek to make sense of the captions, though. If you can cope with roughhewn steps, a climb up through the fortress site lets you view the church from above, against the striking backdrop far below.

Location: 2 km south of the town of Asenovgrad

The village of Momchilovtsi seems sleepier than you might expect from its name, which commemorates Momchil Voyvoda, a 14th-century bandit-turned-local ruler celebrated for fighting the Turks. But more is going on here than is immediately apparent. The townspeople’s efforts to pass on their cultural heritage to the next generation have earned it the accolade of Unique European Settlement. Dancers don traditional costumes once a week and perform at the local cultural center, part of a nascent tourism scene developing for the last decade. With the populations of many such small towns falling as young people seek their fortunes elsewhere, Momchilovtsi residents proudly tell visitors that this is not the case here.

In another demographic quirk, a full quarter of the population is said to be over the age of 85, which has been put down to the health-promoting properties of the local bacteria. The news travelled far: Momchilovtsi-branded yogurt, using bacteria from the village, is now sold in China by a Shanghai company. (A picture of happy Chinese children with their Bulgarian yogurt, presented to the mayor by a visiting delegation, is on display in the village art gallery.) The religiously inclined might find another explanation for the local longevity: there are 28 chapels in and around the village, serving a population of fewer than 1,400.

Known in English as the “wonderful” or “marvelous” bridges, the blasé visitor might wonder just how amazing a rock formation can be. These – a series of natural arches formed by river erosion likely followed by an earthquake – deserve their flattering adjectives. Tourists can visit only the largest arch, as the rest are impassable. One is enough: the main section, 45 meters tall and 40 meters wide, is breathtaking, and it is almost unfathomable how nature inadvertently created something that looks like a large railway or road bridge fashioned by much human expertise and endeavor. The “bridge” is in a dense, old conifer forest, further adding to the sense of mystery engendered by this astonishing natural monument. Bulgaria’s second largest monastery was founded nearly a millennium ago, though it fell to the Turks and was renovated in the 15th century. Today, the only original part remaining is the ossuary (where skeletal remains are housed). The main church, a mere four centuries old, contains a selection of frescoes; visitors from Romania will know what to expect as Bulgaria’s Orthodox churches and the worship conducted within them are fairly similar to the local style. Don’t miss the panorama mural on the outside wall of the refectory, which depicts the story of the site. The buildings are set around a peaceful courtyard, with pleasant trees and fountains; it’s a good spot for contemplation or a spot of restfulness before continuing your journey.

Location: 1.5 km from the village of Bachkovo, 9 km south of Asenovgrad

This stunning marble rock canyon yields some of Bulgaria’s most impressive scenery. The cliff faces are so sheer and, at times, near, that the feeling is akin to walking the skyscraper-flanked streets of New York or Hong Kong – only the structures were left by nature, rather than humans. A dense coating of pine trees adds to the glorious vistas, which you can enjoy on a drive through the area (provided your stomach can cope with the tortuous roads). The surroundings are popular with birdwatchers.

Fans of the classics – this is your chance to walk in the footsteps of Orpheus! Devil’s Throat Cave is said to be the main hall of Hades in the ancient Greek myth. The musician and poet, who could charm anyone he met, journeys into the underworld to rescue his wife, Eurydice, who’s been killed by a snake bite. His charm offensive persuades the overlords of the underworld to let Eurydice return with Orpheus to their realm, provided neither looks back. But antsy Orpheus turns round just as the couple are nearly home free, losing Eurydice forever.

Even if you know nothing about antiquity or Greek myth, the cave is a thrilling experience, from the thunderous waterfall to the sinister-looking ranks of bats in their upside-down repose. If you’re of a decent fitness level and unflappable disposition, you can exit the cave via a 300-step climb. The steps are uneven, damp and not well lit (though you have handrails all the way), and as you ascend you may develop some sympathy for the nervy Orpheus, but if you have the nerve there are splendid views when you emerge, blinking, into the sunlight. Non-climbers can exit the cave the same way one enters.

Bats hanging just above human head level, stalactites and stalagmites, and a gloomy chill (the temperature is a constant 6 degrees) all make Bulgaria’s largest cave system eerily atmospheric. In total there’s around 10 km of labyrinth, of which the 45-minute tour takes you along about a tenth.

The commentary has to work hard to compete with the sheer, Indiana Jones-esque thrill of being in such a striking subterranean haunt, but the facts are also fascinating: the stalactites grow at a rate of 1 cm every 50 to 100 years, and evidence has been found of Neolithic cave-dwellers dating back 6,000 years. Bizarrely, there is also a wedding chapel: if Las Vegas doesn’t appeal, you and your beloved could join the more than 20 chilly couples who have tied the knot among the bats.

Where to base yourself:

Situated close to the Greek border, Rustic Smolyan is one of Bulgaria’s highest towns, at an altitude of 1,000 meters. This elevation makes it ideally suited to host the country’s largest planetarium, where visitors can sit back and enjoy a journey through the cosmos. The town is also home to an art gallery, and Bulgaria’s third largest church, the Cathedral of Saint Vissarion of Smolyan, which began serving the faithful in 2006.

Famous for hosting the only ski and snowboard factory in the Balkan peninsula, Chepelare is a good base for visiting the Wonderful Bridges. Outside ski season there is hiking and horse-riding to be done, and a couple of pretty parks to visit.

Dubbed the “Sunny Beach of winter tourism”, Pamporovo’s ski resort status is well documented. However, the town also serves as a base for spring and summer activities, such as hiking and cycling.

Qatar Airways and Tarom both run direct flights between Bucharest and Sofia, five or six days a week.

Spring fares start at less than EUR 200 for a return flight. Driving from Bucharest to Sofia takes around five and a half hours, and it’s about another three hours from Sofia to the Rhodope Mountains.

The best way to get around the area is by car, as bus services tend to be infrequent. Distances are not great, but progress is often slow because of the mountain roads.

Debbie Stowe and Vasile Szakacs travelled to Bulgaria courtesy of the country’s Ministry of Economy and Energy and Bulgarian Publishing Company.