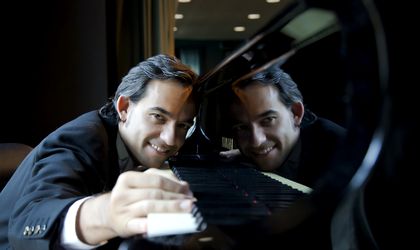 In an event taking place under the baton of Nicolae Moldoveanu, the Radio Hall is hosting Spanish pianist Josu Okinena on Friday, February 19. The audience will have a chance to enjoy a Spanish flavored evening, with Spain, music signed by French composer Emmanuel Chabrier following a journey in the Iberian lands, and Nights in the Gardens of Spain, Manuel de Falla’s work, one of Spain’s greatest musicians of the first half of the 20th century.

In the second part of the evening the Fifth symphony of Beethoven will come to stage, a musical piece dubbed the Symphony of Destiny. One of the most frequently performed symphonies of all time, Beethoven’s creation had its premiere in Vienna in 1808 under the baton of its composer. Considered one of the symphonic scores to have a great emotional impact on the audience, the symphony influenced many other great composers such as Brahms, Tchaikovsky, Mahler and Berlioz. Schumann wrote about Beethoven’s work: “Although so often heard, it still exercises power over time, as those great phenomena of nature, which, no matter how often they occur, fill us with wonder and awe. This symphony will pass over centuries.”

Nicolae Moldoveanu , who will be the conductor for the evening, is also a violinist, accompanist, organist and has studied across renowned institutions, such as the Leipzig Conservatory (where he studied organ), the Zurich Conservatory (which was dedicated to the art of conducting) and then Basel and Bern and finally at the Royal Academy of Music in London.

Josu Okinena (pictured) has done important solo work alongside artists like Alan Gampel, Migel Etuarte, Almudena Ortega or Maite Maruri. He studied at the Superior Conservatory of Music in San Sebastian and later perfected his training at the Royal Conservatory of Music in Madrid. At Santiago de Compostela he was also awarded the Andres Segovia y Jose Miguel Ruiz Morales distinction, for his interpretation of Spanish music.