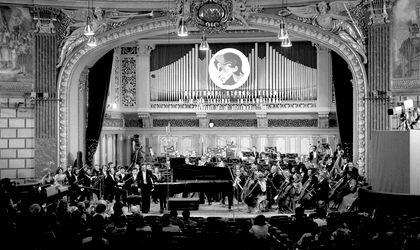 1958 – The official opening day of the festival was September 4 1958, merely three years after George Enescu’s passing, thus marking the official debut of the most important international musical event hosted by Romania. Big names from the music world such as Yehudi Menuhin, David Oistrah, Halina Czerny-Stefanka, Nadia Boulanger, Monique Haas, Iacov Zak and Claudio Arrau, and conductors such as Sir John Barbirolli, Carlo Felice Cillario and Carlo Zecchi, were present for this first run.

1961 – The second run paid much more attention to repertoires from lyrical theatre and vocal art. This initiative was supported by renowned soloists such as Dimitr Uzunov, Ivan Petrov and Anton Dermota. Five lyrical spectacles were staged by the Bucharest Theatre of Opera and Ballet, alongside two ballets: La Piata by Mihai Jora and Priculiciul by Zeno Vancea.

1964 – The third run started under a cloud – the passing of the conductor George Georgescu a few days after the international event had begun, depriving the Romanian stage of an indisputable artist. The success of the previous runs was evidenced by the presence of top international artists such as: Arthur Rubinstein, Henryk Szering, Gaspar Cassado, Monique Haas, Miroslav Ceangalovici, André Navarra, André Cluytens, Herbert von Karajan, Zubin Mehta and John Pritchard.

1967 – This year great importance was again given to promoting both Enescian music and contemporary Romanian creations. It was one of the years that featured the highest number of George Enescu’s musical pieces (12) and saw 18 Romanian composers included in the concert program.

1970 – The Beethoven bicentenary led to the Bonn titan featuring prominently during the festival, with 12 works interpreted.

1973 – The sixth George Enescu Festival was cut to only one week, and artists were invited exclusively on political criteria, mostly coming from socialist countries or communist sympathizer nations. Three of the five international orchestras came from communist countries.

1976 – The festival had no competition or organizing committee. The Romanian public could attend the concerts of Pierre Cochereau, Christian Ferras, Grace Bumbry, Victoria de Los Angeles and Elisabeth Schwarzkopf, three years before the retirement of the great artist.

1979 – The event was now becoming more national in scope. Despite this drawback, there were a few remarkable guests, such as Nikita Magaloff, Viktor Tretiakov, Ludwig Hölscher and Sheila Armstrong.

1985 – An unprecedented number of Romanian works were aired during the 10th run, with 80 contemporary pieces performed – an impressive tally, considering that only 76 Romanian composers were included in the program. Enescian creations were also generously represented, with 25 works played, the highest number to date.

1988 – The 1988 festival coincided with the Romanian Atheneum’s centenary. The event also celebrated 120 years from the foundation of the George Enescu Philharmonic.

2001 – The 2001 run was by far the richest and most glamorous so far, and saw prestigious international artists take to the Bucharest stage during the three-week event.

2003 – The organizers concentrated on promoting contemporary local compositions, through the series entitled Romanian Music of the 20th Century, which featured major operas by the most highly acclaimed Romanian composers.

2005 – The 2005 festival commemorated 50 years from the passing of the great composer. The objectives were to present Enescian works to the prestigious artists invited, to promote contemporary Romanian compositions, to honor past laureates in the festival program and to introduce a jazz repertoire. New elements were Johann Sebastian Bach’s Brandenburg concertos and orchestral suites, performed by the King’s Consort ensemble, and Ludwig van Beethoven’s concertos for piano, with Christian Zacharias as soloist.

2007 – Highlights included the Oslo Philharmonic Orchestra conducted by Jukka-Pekka Saraste, Murray Perahia, Martha Argerich, Trio Beaux Arts and the violinist Joshua Bell who replaced Maxim Vegherov (who had to pull out). The absence of the masterpiece Oedipe on the festival banners was criticized.

2009 –  In response to the criticism of the omission of Oedipe from the festival banners last time, this year’s event debuted with this spectacle, a co-production by the Capitole Theatre in Toulouse and the Romanian Opera in Bucharest.

2011 –   Internationally renowned ensembles performed in the series Great International Orchestras and Chamber concerts, and there were opera and ballet performances. Another 23 concerts were held in the rest of the country, in Arad, Busteni, Cluj-Napoca, Craiova, Iasi, Sibiu, Târgu Mureş and Timişoara.