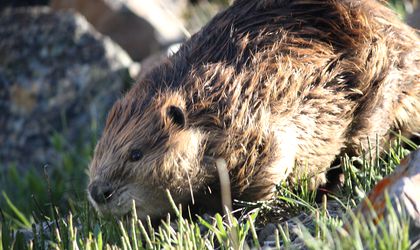 Video captured by Rewilding Europe and WWF Romania proves that a population of beavers have moved into the Danube Delta, after the species has been absent in the region for the last 200 years.

The European Beaver (Castor fiber), a species under strict protection, disappeared at the start of the XIXth century from Romania and most European regions for the same reasons: excessive hunting and habitat intrusion.

The project for reintroducing the species in Romania was initiated by ICAS Brasov in 1998 on major river courses (Olt, Mures, Ialomita). 12 years later, the beavers relocated without any human intervention in the Delta, a phenomenon which is part of the general trend regarding the reintroduction of this species in Europe.

The beaver, dubbed the “engineer of ecosystems”, has a long term impact on the environment which it calls home, enriching biodiversity. Beaver-built burrows can serve as nests for birds or hiding places for reptiles and amphibians, the ditches the beaver builds represent good nesting places for fish to lay their eggs, according to Alexandra Panait, Danube Delta project coordinator for Rewilding Europe.

WWF Romania and Rewilding Europe encourage local entrepreneurs to value nature and live responsibly off of it. One opportunity would be to develop tourist packages around bird watching and to guide other nature-lovers in discovering the animal diversity of the Danube Delta.