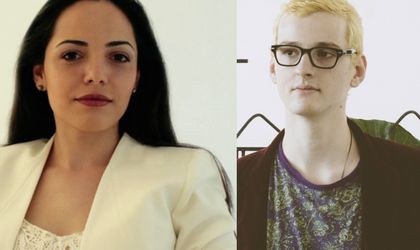 With the curatorial concept “What are we building down there?”, this year’s Bucharest Biennale (BB7) highlights the themes of privatization, commercialization and corporatization of the post-socialist city, displacing the biennale onto 21 advertising billboards. Business Review talked to the two co-directors of the event, Gergo Horvath and Flavia Lupu, to find out about the planned artistic footnotes to the existing city infrastructure.

“What are we building down there?” What does that suggest we should expect from BB7?

Gergo Horvath: In keeping with our tradition, Bucharest Biennale 7 will be distinct from what we’ve done before. The curator, Niels Van Tomme, came up with a novel idea of displacing the entire biennial onto 20 billboards around the capital. This will create an entirely new way to navigate the biennial and the city. Because the billboards are all over Bucharest, from Pipera to Piata Muncii and Colentina, not only the visitors interested in the biennial, but everyone around Bucharest will be able to learn about the city and the works of art that tackle issues ranging from privatization to urban planning and our relationship with the places that we live in. Staging an exhibition entirely in a public space will bring art and the ideas behind the works closer to anyone and everyone living in or visiting the city, potentially attracting a lot of newcomers to the art world who might not usually visit museums, galleries or art centers, allowing us to present the biennial to a much wider audience.

What are the main challenges of the Bucharest Biennale?

Flavia Lupu: There are many challenges with any biennale. A lot of effort goes into putting all the pieces in the right places in the puzzle. First, you have to realize you are working within a large framework, and after that, you have to figure out the details. What I think is even harder here in Bucharest is that everything is always moving non-stop, and one of the main concerns is that constant movement may become a Brownian motion and you are never really sure of anything, which means that you have to check, double check, and then recheck everything. Something that is outside the organization’s plan and schedule can always crop up – the head of an institution is changed and you don’t have people to work with because everyone is leaving, or you need a signature and no one can sign, or the financial support is delayed. So, you have to find the best solution in the shortest time possible.

Given the number of biennales internationally, what is it about the Bucharest Biennale that sets it apart?

GH: The Bucharest Biennale is different in the sense that there is a bit more openness to risk. Instead of going with the well-tested formats of large biennials, we try something different each time, for example having billboards instead of exhibition spaces this time, or working with very young curators, like Felix Vogel for Bucharest Biennale 4. This is perhaps a bit less of a safe approach, instead of going with something that has worked before, so you know it will work the next time as well. I think this is also one of the things that have helped the biennial grow, on top of attracting people from all over Romania; there is also a lot of international interest in the biennial.

How has Bucharest benefited culturally from the biennale?

FL: Bucharest is a strange city. One of the best results that I think we have had until now is to work with the mentality of the Romanian cultural world, which, in time, by having an international biennale, has put Bucharest on the contemporary cultural map. Because of the biennale, people from the local cultural scene have understood what cultural management means, how you can use communication strategies and a marketing approach in the cultural field, and that you have to really give something back to the community to get attention from your contributors. That is, let’s say, the narrow field of the art world.

In a broader field, the biennale is about the city, it creates awareness about the inner life of that city, the problems that the place is facing, or the problems that could appear in time. Many critical eyes can glance upon that part of the world, and this is because people are coming to see art, or to make art. And last, but not least, is the economic aspect: culture can have an impact on increasing the economic growth of a city (in different ways; I am not thinking only about cultural tourism), but, like everyone here, we are still working hard on that.

How do you choose the curator of the event? Why Niels Van Tomme?

GH: The Bucharest Biennale has an advisory board composed of local and international curators, artists and directors whom we consult and draw up a shortlist for the position. After all the discussions and brainstorming, the founders, Razvan Ion and Eugen Radescu, make the final decision and choose from the list. Also, the curator of the current event meets the next curator or curators in some cases during the opening days of the biennale to talk about how the process of curating the exhibition went and what happened.

The biennale will take place at the same time as the elections. How does the art displayed on the billboards go with the political messages?

FL: Well, if you put it simply, to use the billboards will be more expensive because we have taken some of them out of the market. What I can say is that because of the new law regarding the election, politicians cannot use billboards anymore. Also, it depends on how you regulate political campaigns: now you can only use banners, but, as I said earlier, things here always change. The political parties, with their NGOs, are transforming their political campaigns into so-called social campaigns. By using this strategy, you can see the politician, but you cannot see his or her party, and so billboards can be used.  Therefore, our message will be more visible with the assumed political message, sometimes as large as the politician’s social campaign. We will have to see if we come into conflict with that message or not.

The event takes place between May 26 and June 30 in 21 locations across the city. More information about the event can be found here.