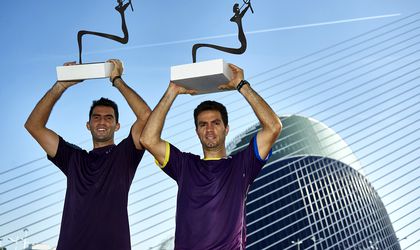 The pair Tecau and Rojer won in one hour 45 minutes, and got 500 ATP points, which virtually qualifies them to the Champions Tournament in London. “The partners didn’t have big problems to solve the final with 6-4, 6-2 in front of Kevin Anderson and Jeremy Chardy, who surely where tired physically and mentally of the double draw in which one they played a principal role”, is written on the official news section of the competition.

Valencia was the eighth title in 2014 for the Romanian-Dutch pair, after those in Zagreb, Casablanca, Bucharest, s-Hertogenbosch, Washington, Shenzhen and Beijing. They also lost one final, in Rotterdam, notes Agerpres.

Tecau’s record is now of 24 ATP tours won in doubles — 8 with Rojer this year, three with Max Mirnyi, ten with Robert Lindstedt , and one with each Victor Hanescu, Dick Norman and Marcus Daniell. He also won a mixed doubles titles with Bethanie Mattek-Sands, the 2012 Australian Open.