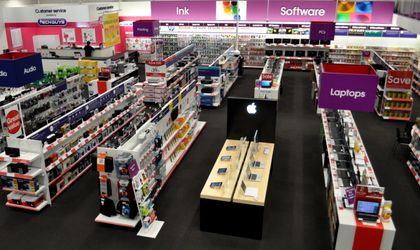 The technical consumer goods (TGC) market in Romania in the third quarter of 2015 outperformed the first two quarters of the year, registering a value of EUR 538 million, according to the GfK Temax study. With a 9.5 percent y-o-y increase in Q3, the market reached a total of EUR 1.42 billion during the first nine months (up 10 percent).

The biggest contribution to the TGC market growth was brought by its largest sector, telecommunications, which reached EUR 176 million in Q3 2015 (a healthy 23.7 percent increase y-o-y). The telecom area also indicated the highest rise during the first nine months, going up by 18.9 percent, to EUR 455 million. Mobile accessories (especially headsets) and high-end smartphones were the stars in the telecom sub-market.

Major domestic appliances also saw a robust 10.7 percent growth year on year, reaching in Q3 2015 EUR 127 million, while during the first nine months it went up to EUR 301 million (up 13.5 percent over the same period of the previous year). The category was driven by seasonal sales of cooling products (refrigerators and freezers), but also by the built-in appliances segments which continued the positive trend. The market for washing machines slowed, recording a single-digit growth rate in the third quarter of the year.

Small domestic appliances recorded a slower pace during Q3, with a 1.4 percent rise y-o-y to EUR 33 million. However, the annual increase over the first nine months reached 9 percent, the sector totaling EUR 92 million over the mentioned period. According to the study, the slowdown was mainly owed to last year’s strong sales of cylinder vacuum cleaners in Q3 2014, driven by EU legislation. Some high-end products within the kitchen appliances and personal care segments continued to record impressive revenue increases.

Another sector to bring a positive contribution to the market was that of consumer electronics, registering a 3.2 percent rise in Q3 2015 over the same quarter of 2014, while during the first nine months it took a 4.6 percent advance to EUR 214 million. The market for TVs recovered after a negative result in the previous quarter, recording a single-digit growth rate. This was due to increased sales of larger-screen TVs, UHD products and Smart TVs. The audio market continued to record increased demand. Product groups, including loudspeakers and docking speakers, registered double-digit increases.

IT products saw a slight fall year on year (0.1 percent) in the third quarter, though presenting a good recovery from Q2’s sales (EUR 104 million registered in Q3, over EUR 95 million in Q2). The first nine months of the year brought sales up to EUR 306 million (up 2.6 y-o-y). Tablets were the major impactor in the IT sub-market, with a double digit fall, mainly due to smaller screen sizes. The desk and mobile computing, monitors, keying and pointing devices segments, all reported higher demand. Romanian consumers preferred mobile computers equipped with high-performing processors.

For the third quarter of 2015, the value of the office equipment sector reached EUR 14 million – a decline of 4.7 percent, compared to the third quarter of the previous year. Laser cartridges recorded a double-digit decline and had the biggest negative impact on the consumables market. Printing devices performed positively with an overall growth rate of 3 percent, mainly due to sales of multifunctional devices. The first nine months saw a slight increase for the category, however, going up by 0.8 percent to EUR 42 million.

The photography sector was the one to record the most dramatic fall against Q3 2014, to a EUR 6 million total in sales (down 22.7 percent). With similar results all throughout the other quarters of the year, the nine months results reached EUR 17 million (a 15.7 percent drop y-o-y).