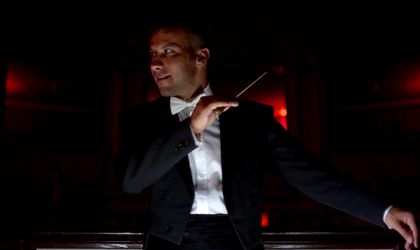 Conductor Tiberiu Soare usually presents himself as, of course, the National Bucharest Opera ONB conductor since 2005, but also as having made his debut at ONB with Tchaikovsky’s “The Nutcracker.”

“When I mention The Nutcracker, there is a temporal affective regression, and I remember my first concert as the ONB conductor,” says Soare. “It was a winter Sunday morning, I had already dressed up in my tuxedo and I was going to the pit to meet the orchestra when I heard children’s hums and buzzes. It was truly a kindergarten atmosphere, which I assumed will be over as soon as the performance started. But I was definitely wrong; and it was the best concert in my life to hear all the children’s noises and talking about the ballet,” added the conductor.

Later, after studying more about Tchaikovsky’s compositions, Tiberiu found out that the Russian composer had in mind the exactly same thing: a ballet for children, a magic moment with magic characters and special instruments. “The Nutcracker” is entirely a ballet to be performed in winter time as it’s the story of a little girl, set at Christmas night.

The Nutcracker is a two-act ballet, originally choreographed by Marius Petipa and Lev Ivanov with a score by Pyotr Ilyich Tchaikovsky, and starring the famous Olga Preobajenskaya in the leading role. The libretto is adapted from E.T.A. Hoffmann’s story “The Nutcracker and the Mouse King” by Alexandre Dumas father called “The Tale of the Nutcracker,” first performed on stage on December 18, 1892.

One of the magic flashes that the ballet offers the spectators is the solo moment interpreted by the Sugar Plum Fairy, who performs on the celesta’s sounds. When Tchaikovsky’s first heard the celesta, he was in Paris, the last European stop before U.S. From the moment he heard it, he knew those sounds must be in his next composition.

The Synopsis of The Nutcracker

The ballet opens in a snowy Christmas Eve at the Stahlbaum home, with Dr. and Frau Stahlbaum and their children, Marie and Fritz, who are welcoming their guests to a Christmas party. There are games and gifts for the children, and dancing for everyone. Marie’s beloved godfather, Herr Drosselmeier – a magician character, introduces her to his young nephew and gives her a wonderful present: a handsome wooden Nutcracker, which Marie finds it the most beautiful toy in the world.

After the party, when everybody already went to sleep, Marie comes downstairs to see what her favorite toy is doing under the Christmas tree. In the large hall of the house, Marie discovers that out of nowhere, giant mice scurry into the room, and the Christmas tree begins to grow, higher and higher, until it towers over Marie. Everything in the room disappears except for Fritz’s toy soldiers and the Nutcracker—all now as big as Marie. The Nutcracker leads the toy soldiers into battle with the mice, and Marie helps him by throwing her slipper at the fierce Mouse King, who the Nutcracker then slays. Now that the Mouse King is dead, an ancient spell has been broken, and the Nutcracker takes her to another land, in a beautiful travel experience.

Marie and the Nutcracker arrive in the Land of Sweets and are greeted by the beautiful Sugar Plum Fairy and all the other inhabitants of her kingdom. The Nutcracker tells the story of the battle with the mice, describing Marie’s courage to help him defeat the Mouse King. Everyone is delighted that the Nutcracker and Marie are safe, and the Sugar Plum Fairy leads them to a glittering throne, where they can enjoy cakes and candies.

Everyone dances for the two children: Hot Chocolate from Spain, Chinese Tea, Coffee from Arabia, the Candy Canes, the Marzipan Shepherdesses, and Mother Ginger, with her eight little polichinelles. Then comes the Waltz of the Flowers, with a shimmering Dewdrop dancing among the lovely blooms, and finally, the Sugar Plum Fairy returns with her Cavalier to perform the majestic dance.

The act ends when Marie discovers that she had simply been asleep on the sofa, with her favorite toy in hand.

Every month, Tiberiu Soare talks with the public about opera in a cultural project called “Why do we go to the opera ?”, organized by Calea Victoriei Fundation.