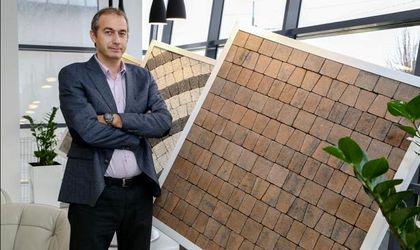 Symmetrica, Romanian producer of paving and vibro-pressed curbstones, registered a 17 percent increase in turnover, reaching RON 87 million (EUR 19.5 million), according to a company press release. Additionally, in 2015 Symmetrica opened a new production line after an investment of approximately EUR 1.5 million.

The evolution of projects in the private sector, the recommencing of investments on the residential, office and commercial segments, together with allocating funds for public investments positively influenced the company’s turnover in 2015. “If at the beginning of 2015 we were betting on a turnover growth of around 5 percent, at the end of the year we saw a 17 percent growth,” said Sebastian Bobu, Symmetrica executive director.

As for 2016, “for this year we are definitely betting on a growth in demand for residential private projects, especially,” added Bobu. Moreover, the company is aiming to “at least” maintain the turnover level seen in 2015 and to deliver a similar product volume, according to the press release.

In terms of the volume of delivered product in 2015, Symmetrica saw a 20 percent growth in 2015 compared to 2014. As such, the company delivered 3 million meters as opposed to 2.5 million meters in 2014. Moreover, Symmetrica registered a production capacity of 13,5000 meters of product per day in its five factories in Romania, says the press release.

Of the total turnover for 2015, 30 percent came from private projects, “be they commercial, industrial, or residential projects, while 10 percent from sales to DIY retail chains. The rest of 60 percent was made up of deliveries to public projects,” added Bobu.

For 2016, Bobu estimates that the market could grow several percent more, this due to the degree of absorption of existing European funds.