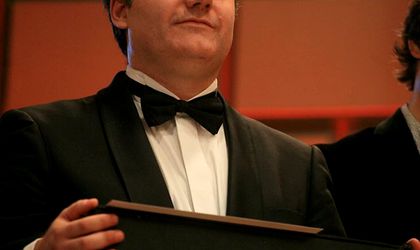 240 young artists from 36 countries on 5 continents signed up to participate in the 2014 Enescu Competition. The Competition’s total prizes worth was of over EUR 100.000.

The final contenders of the Piano Section Josu de Solaun (Spain), Ilya Rashkovskiy (Russia) and Vassilis Varvaresos (Greece) concluded on Saturday, September 27, the 14th Edition of Enescu Competition, played together with George Enescu Philharmonic Orchestra conducted by renowned Justus Frantz, Concerto No. 1 in B-flat Minor, Op. 23 by Tchaikovskyand Concerto No. 3 in D Minor, Op. 30 by Rachmaninoff to an overwhelmingly full house at the Romanian Athenaeum on Saturday night. The public could also watch live the Piano Final on a large screen outside the Romanian Athenaeum – a technological premiere of the Enescu Competition’s 2014 Edition.

„It is a great joy to be in Romania under this special circumstances. Speaking as a Frenchman, I can say that we had the chance to host several Romanian artists who lived and performed in France; and we owe them a debt of gratitude for our much richer cultural life today” said in the opening of his speech Jean-Claude Pennetier, the President of the 2014 Enescu Competition’s Piano Section Jury.

The First Prize was awarded to Spanish pianist Josu de Solaun, who – as a laureate of the Enescu Competition –  is also invited to perform next year at the prestigious Ravello Festival in Italy. The Second Prize went to Ilya Rashkovskiy (Russia), and Vassilis Varvaresos (Greece) received the Third Prize.

Piano Semifinalist Adela Liculescu (România) was recognized on the Romanian Athenaeum stage as The Best Placed Romanian in the 2014 Enescu Competition, prize awarded by the Erbiceanu Cultural Foundation. The Saturday Evening Gala presented as well the Awards in the Composition Section, where 31 works have been submitted. Sebastian Androne received the Award for the Best Symphony – Tektonum, while Alexandru Stefan Murariu was awarded the Prize for the Best Classical Chamber Music Work – El Niño.

Josu de Solaun: „I feel like Enescu watches over me”

Born on October 27, 1981, the laureate of the 2014 Enescu Competition’s Piano Section, pianist Josu de Solaun (Spain) has performed as a soloist with prestigious international orchestras such as Mariinsky Theatre Orchestra, Mexico City Philharmonic Orchestra, New York Sinfonietta, and Leos Janacek Symphony Orchestra. During the Enescu Competition in Bucharest, the pianist lived in a rented apartment right on George Enescu Street. „I knew it was close to the Athenaeum, but it came as a surprise to see that I lived precisely on George Enescu Street, in the same block of flats where Enescu himself had lived for 6 years. Moreover, my apartment was right under the one Enescu had occupied. I feel like he watches over me. I’ve been an Enescu fan for a long time. And I’ve always wished to perform at the Romanian Athenaeum”, shared Josu de Solaun. De Solaun played George Enescu’s Piano Sonata No. 1 in F-sharp minor, Op. 24 in the Semifinal Round and Concerto No. 1 in B-flat Minor, Op. 23 by Tchaikovsky in the Final.