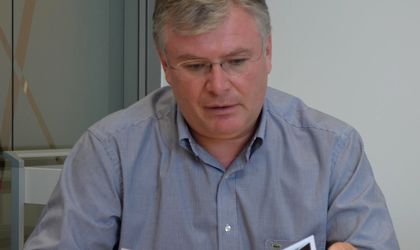 Sorin Mindrutescu, GM of Oracle Romania, was one of the organizers of the Rasnov Historical Film Festival, which took place in Rasnov, Brasov county, last month. He told BR how an apparent film industry outsider can be part of the equation and shared his personal recommendations from the works screened during the festival.

Since when have you had a passion for movies?

I guess I always have. I could not tell you the exact moment when I became addicted to cinema, but I remember my college days when I used to hunt quality movies in Bucharest’s cinemas.

How did you become part of the organization of the Rasnov Historical Film Festival?

In the summer of 2012, I came to the festival by chance, without knowing too much about the event. I was impressed by the unique combination of films, events and special guests. What really impressed me was that the organizers managed to bring history into the present. More precisely, they screened Steven Spielberg’s movie Munich – a drama based on the Israeli government’s secret retaliation against the Palestine Liberation Organization after the Munich massacre at the 1972 Summer Olympics. For that screening, the organizers brought to the festival Henry Herscovici, who had carried the Israeli flag at the opening of the Olympics and witnessed the events presented in the movie. That was the moment when I decided to be part of the festival, because of its ability to combine past and present.

How was the sixth edition of the festival?

This edition brought to the Rasnov citadel and the Amza Pellea cinema over 40 documentaries and fiction films, historical debates and witness testimonies, interviews with actors and directors, concerts and book presentations. This year, we celebrated 100 years since the First World War, 25 years since the 1989 revolution and also the Los Angeles Olympics in 1984. Moreover, 29 students from Romania and the Republic of Moldova participated in the festival, attending conferences held by Iulian Fota, Bogdan Olteanu, Sergiu Celac, Adrian Cioroianu, Theodor Paleologu, Ion Caramitru, Sever Voinescu and many others, as well as the ambassadors of Slovakia and the Czech Republic, Jan Gabor, and Jiri Sitler.

Why did you choose to feature Corneliu Coposu?

One of the major themes presented at the festival was the revolution of 1989, so we decided to organize a photo exhibition focusing on Corneliu Coposu – which turned out to be a winner – including pictures from his political life as well as his time in prison. It ran until the end of August.

What are your recommendations for anyone who did not attend the festival?

You were talking about a project called the Romanian Cinema Museum. How do you see this museum?

The Romanian Cinema Museum is a dream built with the support of Irina Margareta Nistor. I strongly believe in the value of the Romanian film school and that all these success stories deserve to be under the same roof.