Sochi 2014: How the Winter Olympic games are portrayed in social media 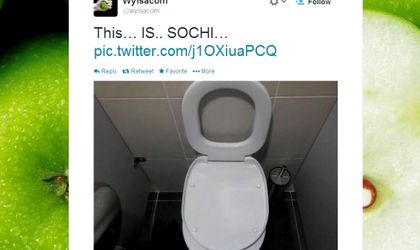 The Winter Olympic Games are avidly watched on the television, but just as avidly commented on different social media channels, where supporters come together to sustain their favorite athletes or events. Twitter hash tags, Facebook visuals and negative user generated content which makes fun of the Russian Authorities are just some of the tools involved in this war of opinions.

So far, the Winter Olympic Games are perceived in social media as a confrontation of the Eastern and Western Civilizations, according to GollinHarris ad agency.

The LGBT community started to protest against the Russian authorities and the companies sponsoring the Winter Olympics (Coca-Cola, Mcdonald’s, P&G) over three months ago and have attracted a wide base of supporters through social media. Google and Amnesty International took a stand against the russian laws, creating debates and discussion among human rights advocates. These advocates believe that it is outrageous for companies to promote certain values in western markets, but to support a anti-human rights government in another market.

Public outcry against certain companies hijacked their Olympic-themed marketing campaign. Coca-Cola began a campaign where fans could print their supportive messages on coca-cola can. The campaign was stopped, after the public complained about not being able to introduce the words “gay” or “lesbian” in the system. protesters went as far as creating a video against Coca-Cola.

McDonald’s attempted to launch a Twitter campaign where, similarly, fans could post messages of support for the athletes, using the hashtag #cheerstosochi. The hashtag was taken over by protesters that chided McDonald’s for their murky stance on gay rights. Procter&Gamble had the same fate, after LGBT supporters created ironic visuals, criticising the conglomerate for sponsoring the Olympic Games.

A week before the opening ceremony, the Winter Olympics were the number 1 trending topic on the global stage, thanks to pictures distributed through Twitter, Facebook and Instagram showing the derelict state of Sochi hotels and equipment. The pictures were all organised under the hashtag #Sochiproblems.

The hashtag increased the Olympic Games’ virality on the Internet, and also helped the journalists and athletes that participated in the process of sharing pictures to increase their own visibility and audience on the Internet. All the while, Olympic sponsors took every opportunity and every topic to create relevant messages for their followers, in relation to the Winter Games.

For example, some brands used the #Sochiproblems hashtag to promote their own products. For instance Airbnb is a company that rents accommodation in different cities, across the globe, including Sochi.

Other brands may not have a direct relation to the Winter Olympics, but by use of creative thinking, they managed to profit from the topic’s popularity: Oreo, Mario Sonic. In Romania, Pizza Hut Delivery and Elextrolux created customized visuals for the Event.

It’s hard to tell at this early point in the event where the communication strategies of journalists, athletes and brands will take us. For now, as a result of various problems and tensions between human rights supporters and russian authorities, the Olympic Games are portrayed through social media in a way that reminds us of the Sochi mascot, the nightmare bear: the organizers mean well, but what the public sees and hears on the internet is very different from the “official” image of the 2014 Winter Olympic Games.