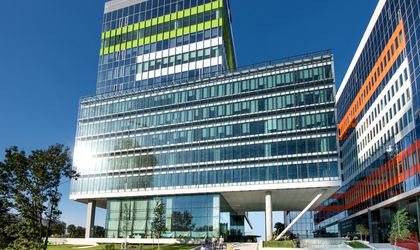 The Green Court Bucharest is a class-A office complex newly constructed in Bucharest’s new central business district. It was commissioned for use at the beginning of April 2015. The total leasable area of the newly-sold Building B is around 18,600 sqm. It is already more than 80 percent leased, with major tenants such as Sanofi Romania, Adecco Romania, Carrefour Romania, Colgate Palmolive Romania and RINF Outsourcing Solutions.

The office complex comprises three buildings with a total leasable area of approximately 54,500 square meters. The sale transaction of Building A to Globalworth Real Estate Investments was finalized in June 2015 and the company has now acquired its second property at the development.

“The Green Court Bucharest office complex has proved to be a considerable success. The market in Bucharest is very promising for investors looking for prime office products, which compare favorably to more mature western and northern European markets, offering attractive yields and a steady, long-term rental income. The acquisition of the two Green Court Bucharest buildings, Building A last year and Building B this year by Globalworth Real Estate Investments, illustrates the increasing investor interest in Romania. It is evident that global players see great potential in this market, which is why Skanska has further plans to launch one or two projects a year in Bucharest. We believe that this city is a place with an increasing demand for high-class office buildings,” said Adrian Karczewicz, transaction director at Skanska Commercial Development Europe.

According to company representatives, Skanska conducted extensive research before entering the Romanian market, the results of which were very promising. The company now sees that developments such as Green Court Bucharest can easily find tenants and a buyer as high-quality buildings in good locations are very attractive to both of these groups.

The demand for office space in Romania is expected to grow in the coming years, especially in Bucharest, which is a result of the development of the services sector and the positive situation in the labor market. The country was ranked 6th in the top 10 countries for jobs created by foreign direct investment, as presented by EY’s 2015 European attractiveness survey. In 2014, Romania saw the creation of 10,892 new jobs, which was a 77 percent increase y-o-y.

According to the Association of Business Service Leaders (ABSL), Romania is the second-fastest growing shared-services and outsourcing market in Central and Eastern Europe. There are already more than 80 centers employing about 45,000 people in the country and Bucharest is one of the main business-services locations. The Romanian business-services sector is expected to employ 150,000 to 200,000 people by 2020.

In the transaction Skanska was advised by CBRE, acting as the company’s exclusive agent.

Skanska Romania is a green office buildings developer active on the local market since 2011, part of Swedish group Skanska. Skanska Group currently has 57,000 employees in selected home markets in Europe and in the U.S. Skanska’s revenue in 2014 totaled SEK 145 billion (EUR 15.52 billion).