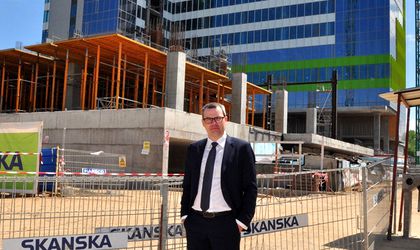 Swedish construction and development company Skanska has completed 80 percent of Green Court Bucharest’s first office building and is looking to buy more land in the capital.

Skanska “is likely” to close a land transaction by yearend as it is looking to increase its foot print on the local market, said Marcin Lapinski, the president of Skanska Property, this Wednesday during a press conference. The company, which is presently developing the first phase of the Green Court Bucharest office project in the Floreasca-Barbu Vacarescu area, said it is interested in buying more land in the same part of the capital or in other central locations with access to the metro. Land prices in these neighborhoods have remained relatively stable over the past years and the fact that Skanska is not using external financing is a plus in the negotiation process, he added.

The first building of Green Court Bucharest is 80 percent completed and it should be delivered in the last quarter of this year. The 12-storey construction has a leasable are of some 19.500 sqm. Another two similar buildings will be raised as part of the same project which will add to total leasable are of 52,000 sqm. The construction of the first building and the foundation of the second one require a EUR 46 million investment.

Starting construction of building number two depends on how the leasing of the first one will evolve, said Lapinski. So far the developer has signed only one tenant, Schneider Electric Romania, which has leased approximately 3,100 sqm. However, Lapinski said he is confident the entire building will be leased by yearend and the second building could “still be completed” in Q2 2015. The company “is in advanced negotiations” with companies which are either entering the local market or existing players who want to relocate.