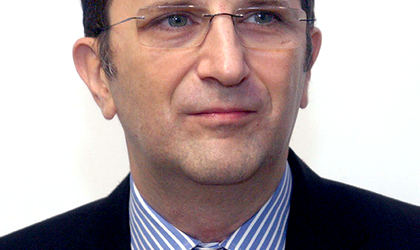 Romanian software developer Siveco announced that Florin Ilia is the new president of the administration board and general manager of the company, effective immediately, the company announced in a press release.

The administration board will also include from now on Doina Binig, strategy vice-president.

Ilia (pictured above) was appointed in this position by the shareholders and the administration board of the company, after Irina Socol gave up all executive positions.

“I do not wish the current situation to affect the activity of the company. Until the situation becomes clear, I decided to withdraw from the position of general manager, while Siveco will be led by a team of professionals that brought international recognition to the IT company and industry in our country,” said Socol.

“From the operational and management point of view, Siveco is working at perfectly normal parameters. We are respecting all our commitments we assumed towards our clients and partners in the national and international projects we are rolling out,” said Ilia.

Ilia, 47, is a graduate of the Faculty of Mathematics and Informatics at the University of Bucharest, being specialized in IT systems and having sound experience in coordinating complex national projects, as well as contributing to the international expansion  of the company. He joined Siveco in 1994. Doina Binig (left), 45, is a graduate from the Faculty of Energetics, the Polytechnic Institute in Bucharest. She joined Siveco in 20017, coordinating the activities of developing the strategy of the company. Binig works in IT since 1993, having important experience gathered in multinationals.

The Bucharest Court decided on September 9 to arrest the two Siveco officials. The prosecutors alleged that Socol was the one that set up the financial scheme which involved the company she founded, aided by several accomplices, who confessed their deeds.

Siveco is part of this financial scheme, being suspected of falsely acquiring services for the creation of IT programs from various “ghost” companies. The programs were not developed in reality, which created damages of EUR 3 million to the state budget. Some of the companies that allegedly supplied IT services to Siveco belong to several Rroma citizens in Sintesti. Following the searches, the investigators seized computers and documentation.