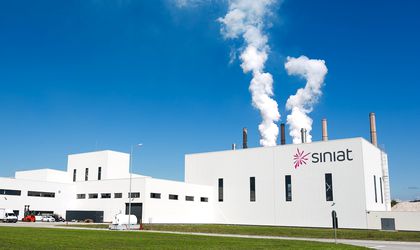 Siniat Romania, producer and supplier of gypsum, coatings and plasters systems, announced the opening of a factory in Turceni, Gorj county, following a EUR 50 million investment from own funds.

The factory is placed on a 32 hectares area and is the largest gypsum plate factory in Romania, according to the company. With a production capacity of 27 million square meters of plates (the surface of 1,000 kilometers of highway), the unit serves a strategic purpose for Siniat Romania, covering 10 markets across South East Europe.

The Turceni plant is the first in Romania using gypsum resulting from the process of gas desulphurisation from a power plant. Thus the gypsum obtained has high purity and consistency, being an excellent feedstock for plasterboard boards. With special equipment, gypsum cardboard plates can be recycled.

Also, the water used in the production process will come from rainwater collected from the roofs of the factory and drilled wells, thus limiting resource consumption, while waste water will also be internally recycled.

Siniat has also invested EUR 1 million in the construction of a new road linking the factory to the national road, bringing limited impact of heavy vehicles on the local community.

The factory opens 80 new employment opportunities for the local community, new employees being trained in Siniat factories in Romania, Italy and Germany.

“Siniat plays an active role in local communities. We particularly appreciate the labour force in Romania, with well trained and motivated people. We constantly invest in technology and use high quality raw material. We develop in a stable economic environment with high potential. Our goal is to capitalize on this potential,” said Marc-André Fritzsche, general manager of Siniat Romania.

The company is a member of ETEX group, present on several continents: Europe, Latin America, Africa, Asia and Oceania. The group is active in 44 countries with approximately 17,000 employees operating in 121 factories.

Siniat Romania has two other factories open in Bucharest and Aghiresu (Cluj) and is the first gypsum producer in Romania to use the raw material resulted from the process of gas desulphurisation from a power plant.