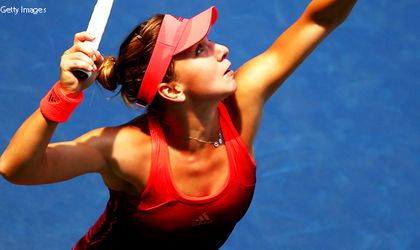 The Romanian player fought the 24th-seeded German for two and a half hours to win 6-7 (6), 7-5, 6-2 on the Louis Armstrong Stadium in Flushing Meadows, New York.

Simona Halep needed medical assistance in the second set and had a hard time against Lisicki, the current holder of the records of fastest serve and most aces in one match. After a 10-minute time-out under the heat rule, called by Lisicki, she came back visibly stronger and eventually raced ahead in the third set.

“I’m really happy that I could win this match. It was a tough one, and I expected a tough match,” Halep said. “I knew she has ups and downs, but she’s strong, so I had to stay there and stay focused. I didn’t play my best, but I still played well enough to win it. I was fighting really well.”

The singles quarter finals US Open award is 410,975 dollars in prize money and 430 WTA points.

Simona Halep has withdrawn from the mixed doubles, were she was pairing fellow Romanian Horia Tecau due to a thigh injury. The pair was supposed to meet 4th-seeded Swiss Martina Hingis and Indian Leander Paes in the quarter finals later on Monday night.