Shopping for homemade products: What do Romanian shops have on offer 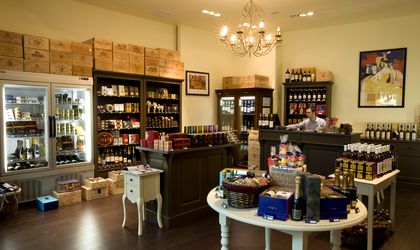 For a while now, the corner shop has been upgraded to something similar to a grocer’s shop, a place where grandma’s homemade products and recipes are carefully prepared and presented for those in need of traditional flavors. However, these places also have a wide selection of international traditional products, most of them enjoyed during our holidays in gourmand territories like France, Italy or Greece. BR visited these “commercial pantries” to find out what is the top ingredient mix for such a business.

This is clearly a new concept for something traditional. You can name it organic, eco or bio, but referring to the ways in which the vegetables, fruits or animals are treated by farmers. Furthermore, this concept is part of a healthy lifestyle which more and more people want and succeed in obtaining. But consuming these kinds of goodies is also about a need we have for the authentic flavors that we liked or which we remember from our childhood.

Last October, Ciprian Stancu, founder of Republica Bio, an online bio store, said that Romania’s organic products market is still small and represents less than 0.5 percent of the consumer goods market, but it is growing fast. He also stated that, in 2014, the sales of organic products valued about EUR 25-30 million. His forecast for 2015 was that the market would exceed EUR 45 million, and by 2017, it could reach EUR 100 million.

Economia.net news portal stated that, according to the Ministry of Agriculture and Rural Development, in 2014, Romania had over 14,500 organic/bio producers which cultivated over 289,200 ha, meaning 2 percent of the total arable land. Numbers are small, but there is a huge potential.

“In general, our clients are those looking for a healthy lifestyle. They spend on average RON 50 and our best-selling products are leavened bread and homemade cookies, which we bake in-house. When it comes to finding the goodies, we have a network of providers from all over Romania whom we discovered through recommendations or during organized traditional fairs,” explained Radu Niculescu, the owner of Companion – Brutarie & Bacanie, a small traditional-products grocer situated on Mihai Bravu Boulevard.

Bacania Rod opened up last year in a small space near Amzei Square and they already have best-selling products. Customers especially buy their homemade products, vegetable eggplant stew-spread (zacusca) and green walnuts and bitter cherry jam. Also, clients like the smoked turkey breast, smoked beef and deer and wild boar salami. On average, clients spend RON 60. “From May to September, our focus is concentrated on the production. All the pots are made in this period. Then, from September, we fill up our deposits and start the selling campaigns. The sales peaks are during Easter and Christmas, when our sales can double, “the representatives of Bacania Rod told BR. Besides the homemade cans, they also work with a series of traditional local producers for meat and cheese products. Their selection is made during the traditional fairs and by recommendations.

Tudor Barbu, managing partner of Pravalia Mica, said to BR that honey products are among the top preferences, followed by fruit and vegetable preserves, milk and meat products. Furthermore, the online store that Tudor Barbu administrates has a very important component of corporate clients who, during the most important Romanian holidays, buy goody bags. Most of the clients are from Bucharest and the managing partner sometimes prefers to deliver the products himself in order to get to know his client. “I truly believe that between an online store and its client, there should exist a human relationship, and the delivery should be made in a particular way, not just by a simple messenger,” explained Barbu. For online shopping, clients spent on average RON 100, while during holidays the amount is RON 300. Pravalia Mica found its suppliers by travelling nationwide and discovering traditional fairs. Due to its online presence, more and more producers contacted them so the process has become a bit easier.

The top premium store to buy wine, champagne, French cheese, chocolate, foie gras, Iberian ham, smoked salmon or caviar(and we only named the top-selling products,) is Le Manoir. The network has been on the Romanian market since 2004. “Similar to the automotive or fashion industries, gastronomy and wines have a number of premium brands, which are found in fine grocery stores around the world, from Paris, New York, Tokyo to Bucharest. These are the suppliers which are targeted by Le Manoir, which is the exclusive distributor in Romania, of some established brands in the field of gastronomy, such as Cinco Jotas, Kusmi Tea, Michel Cluizel and Maxim’s de Paris, as well as some famous wine brands, including Joseph Drouhin, Champagne Bollinger, Penfolds, Famille Perrin and Graham’s. Because we want to provide our customers with the best products, we work with small producers who excel in quality, for example Alain Milliere for natural fruit juices, and Castillo de Canena for olive oil,” explained Cristian Preotu, the owner of Le Manoir.