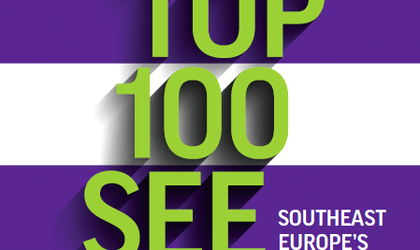 For the eighth consecutive year SeeNews, business news and market intelligence provider for Southeast Europe (SEE), is publishing its ranking of the biggest companies, banks and insurers in the region.

Apart from the flagship ranking of the largest non-financial companies by total revenue, the SeeNews SEE Top 100 ranking includes sub-rankings of the most profitable companies, the most dynamic companies, the biggest loss-makers, the most successful industries and the companies with the biggest revenue per capita. These are complemented by analyses of the trends on some of the most vibrant economic sectors contributed by industry experts, and interviews with the chart-toppers and market-movers.Economic growth in Southeast Europe in 2014, with the notable exception of Romania, remained muted amid sluggish consumer spending, downsized company investments, dampened lending, long-delayed structural reforms and political instability. Despite the stronger-than-expected recovery of the European Union, exports stayed low and foreign direct investments dried up. Falling oil prices managed to only partially offset the negative balance. Geopolitical problems continued to exert pressure on the economies in the region as they remained heavily exposed to Russia and strongly depended on Russian gas. Devastating floods in the Western Balkans affected the energy and agriculture sectors. Regulatory volatility and a large grey economy continued to eat away at the companies’ financial results, as the shortage of skilled workers and reluctance to embrace innovations further limited their competitiveness.

Almost half of the companies in the ranking, 42, saw their revenues go down. The threshold for entry into the SEE Top 100 ranking fell to EUR 420 million from EUR 458 million a year earlier. The revenues of both the first and the last one in the ranking were lower than they were a year earlier, suggesting that small and big companies alike have been affected by the general downtrend.

However, a closer look at the companies’ bottom lines reveals that the negative burden is rather unevenly distributed, with companies operating in the oil and gas industry and electricity taking a harder hit, and automobile and car parts manufacturers faring better than the rest.

The automotive industry’s top performer is Romanian car maker Automobile Dacia, a unit of France’s Renault, which has overtaken OMV Petrom as the biggest company in SEE. In 2014 its total revenue edged up 2.2 percent to EUR 4.25 billion.

Over the past years the automotive industry has been steadily expanding its presence in the SEE Top 100 ranking. The combination of low production costs, skilled workforce and a suitable location that enables access to strategic markets has spurred its growth in SEE.

Five automobile makers, three manufacturers of car parts and two rubber and rubber products makers, whose core business is manufacturing of car tires, made it into this year’s edition of the SEE TOP 100 ranking.

With combined revenues of EUR 40.6 billion, the oil and gas companies continued to dominate the SEE Top 100 ranking. However, their revenue remained flattish, whereas their combined net profit dropped to EUR 263 million from EUR 979 million. The oil and gas sector had 27 representatives in the ranking.

Second in terms of number of representatives in the ranking was the electricity sector, with 18 representatives, followed by wholesale and retail with 17.

Romania, with a population of around 20 million and robust economic performance, stands out as the undisputed market leader in the region, placing 53 companies in the ranking. Slovenia, with 13 representatives, outranked Croatia and Bulgaria which had 11 each. Just like in the previous years, none of the biggest companies in Montenegro, or Moldova made the cut.

Romania stands out as the undisputed market leader in the region, placing 53 companies in the SEE Top 100 ranking with Automobile Dacia climbing up to the top position.

Another Romanian company, a unit of French retailer Auchan, was the most dynamic company among the entrants in the SEE Top 100 chart, after it recorded a surge in revenue of 63.08 percent.

Romania had 21 entries in the Top 100 Banks ranking. Following a 7.04 percent drop in assets to EUR 13.17 billion, Banca Comerciala Romana, a unit of Austria’s Erste, slid to the second place after it topped the ranking for four years in a row.

Romania had 20 entrants in the SEE Top 100 Insurers ranking, one less compared to the previous year. Its highest-ranked insurer was Allianz – Tiriac Asigurari SA at number 6, followed by Omniasig Vienna Insurance Group SA and Astra SA at the seventh and eighth place, respectively.

Methodology of the SEE TOP 100 ranking