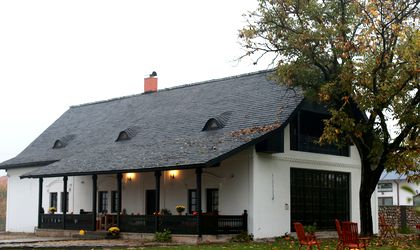 Looking to venture beyond the familiar territory of Bucharest and Brasov, and avoid the tourist traps during the holiday? Bored with the typical hotels? Let BR serve up some holiday suggestions with a difference. From Saxon houses, princely manors and castles to modern five-star guesthouses and golf destinations, get off the beaten track this vacation.

For those looking to escape from the hustle and bustle of the big city this summer and retreat to the serenity and simplicity of country living, the picturesque Saxon villages in southern Transylvania around the medieval town of Sighisoara offer welcome respite. UNESCO has included several of them on its world heritage list for their fortified churches, quaint houses and preserving the same settlement pattern since the late Middle Ages. Time seems to have stood still here and it is not hard to imagine why the UK’s Prince Charles keeps coming back and has even bought several local properties.

Copsa Mare is located some 85km from Sibiu and just 2 km from Biertan, one of the most important Saxon villages with fortified churches in Transylvania and a UNESCO World Heritage site since 1993.

The four charming Saxon houses have been carefully restored in accordance with traditional architecture but boast modern comforts. Truffle hunts, cooking classes, wine tastings and horse riding are just a few of the side offerings.

There are nine rooms to choose from at EUR 70 per night for singles and EUR 100 for doubles, breakfast included.

The manor is a unique piece of living history dating back to the 15th century and still preserving many Renaissance elements. Count Kalnoky and his family offer accommodation in several restored Saxon houses in the villages of Viscri, Miclosoara and Valea Zalanului and tourists have a wide range of activities such as bird watching, hiking, horse-riding and guided tours to choose from. Prices start at EUR 49 per person per night for a double room.

If you come to Transylvania with Count Dracula in mind, his legend may be easily surpassed by the beauty, simplicity and authenticity of traditional local villages. Casa cu Zorele, Romanian for the house with morning glory, promises just this. The traditional Saxon farmhouse was built in the late 18th century and is now a carefully restored B&B with four rooms.

Prices start at about EUR 40 per person per night for a double room, breakfast and dinner included.

A UNESCO World Heritage Site and home to a 14th-century fortified church, the village of Viscri has been getting a lot of attention in recent years following the visits of Prince Charles. If you want to follow in his footsteps and get a taste of the place, Viscri 125 offers accommodation in two restored Saxon houses with 10 rooms with prices starting at EUR 50 for a single room per night, breakfast included. The location has a restaurant built in a former barn which also offers gourmet or traditional cooking classes.

Right in the heart of the Sighisoara Citadel, the five-star Fronius Residence boasts luxurious services in a carefully restored five-century old building. The manor was built in the early 17th century by the Saxon Fronius family and is one of the few houses in the citadel to have survived a devastating fire in 1676. The hotel has nine rooms, some of which overlook Sighisoara’s 14th-century clock tower. Rates start at USD 130/room/night.

If you want to spend a couple of days right in the heart of Sibiu, the three-star Luxemburg House is a good option. A Classical, Baroque and Rococo architectural mix, the house was built in the early 15th century and until 2004 was known as the Red House. After undergoing restoration it opened to tourists the same year. In high season prices start at about EUR 66 for a single room.

If you’re looking for five-star accommodation with a story, forget about the standard hotel options and go off the beaten track this summer. You will find historic princely manors (conace in Romanian) turned into boutique hotels and guesthouses, and there are exclusive destinations available even if you are more into recent history and modern architecture.

Dating mostly from the 18th century onwards, the castles and manors were the residences of local noble and princely families. Pieces of living history, such buildings are scattered around the country, each one with its own architectural character and stories waiting to be discovered.

The carefully restored building preserves all the architectural details of the Oltenia kulas (the local manors) and offers a true boyar-style ambiance.

The restaurant has no standard or à la carte menu, but guests can enjoy “The Boyar’s Lunch”, “The Princess’s Supper” or “Madam’s Exquisite Dinner”.

Maldar Manor can be a good starting point to visit the region of Oltenia and sights such as the Ocnele Mari salt mines, the Transalpina road and the Ranca ski resort. Prices start at EUR 50 per night for a single room with breakfast included.

With its luxurious end-of-the-19th-century atmosphere, modern-day high-end services and some 55 hectares of pristine nature, the

Polizu Manor is a welcome surprise some 70km from Iasi International Airport. The manor was built in 1878 by the Ghica princely family and was used as a summer residence until 1946.

After falling into decay during the communist years it was restored to its previous glory between 2005 and 2010. Prices start at EUR 65 per night for a standard room. The manor is a good starting point to visit the monasteries of Northern Moldova, the Cotnari vineyards and the Cucuteni archeological sites.

This Saxon manor attracted the attention of Price Charles when he first came to Romania in 1993. Restoration began in 2004 and during works the manor’s original well was discovered almost intact in the garden.

There are four double rooms and one single available for around EUR 60 per night. Once in Malancrav be sure to taste the locally made organic apple juice as well as other local produce.

Although it is located in the Busteni mountain resort in the popular Prahova Valley, the Cantacuzino Castle is a little known destination, having been open to the public only since 2010.

Tourists can visit the Neo-Romanian castle and its vast garden with water fountains, waterfalls and a grotto. It can also be rented for corporate and private events. The castle was built in 1911 by Prince Gheorghe Grigore Cantacuzino, a former mayor of Bucharest and PM.

It has a rich history of almost five centuries but in modern times the Bethlen-Haller Castle has become better known as a symbol of the Jidvei wines and vineyards.

If you’re looking for countryside serenity but closer to Bucharest and in modern surroundings, this unconventional five-star guesthouse is the right place to go. Its modern architecture and interior design make for an unexpected yet welcome presence in the rural and traditional area of Doftana Valley.

There is jazz music drifting through the hallways, a gourmet restaurant and a high chance you will find an exhibition or other cultural event there.

The guesthouse is located on the picturesque banks of Lake Paltinu, some 130 km from Bucharest. It has eight rooms with rates starting at about EUR 55 per night, breakfast included.