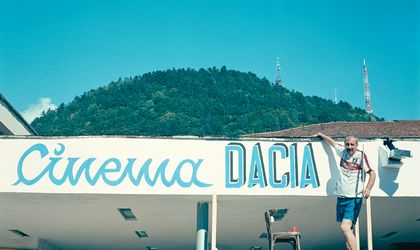 Award-winning director and the Transylvania International Film Festival (TIFF) organizer Tudor Giurgiu wanted to make a documentary about the state of Romanian cinemas, but after hearing some of the great stories of cinema employees, he expanded his scope.

Cinema mon amour is the documentary through which Giurgiu, along with director Alexandru Belc, editor Ioachim Stroe and researcher Ilinca Micu, presents a tale of loneliness, friendship, hope and unfulfilled dreams, the story behind every movie theater which still stands.

Cinema mon amour follows the story of Victor Purice – manager, former projectionist and lifetime cinephile along with his two employees, Cornelia and Lorena, in their everyday battle to preserve Dacia Panoramic Cinema in Piatra Neamt – one of the last remaining cinemas in Romania today. Having lived through “the golden age” of cinema, Victor dreams of bringing back the good old glory days, yet struggles to keep up with the new harsh reality. In a theater that lacks heating and is slowly falling apart, with no support from the State who owns the place, it’s almost a Don Quixote fight.

The premiere Cinema mon amour took place on December 14, 2015, in the presence of the protagonists of the movie, film crew, the former and the actual Minister of Culture, several film critics, journalists and cinephiles. Asked by BR what solution does the Ministry of Culture has for this problem, taking also into consideration the recent law that closed up four cinemas in Bucharest due to high seismic risk law withdrawn by the President in early November 2015, the minister Vlad Alexandrescu explained that “it’s a matter of re-organising the entire system which ran bankrupt. Until now we managed to have a debate with all the parts involved, a meeting where we outlined realistic and immediate objectives in order to reform the system completely.” Also, asked for an answer at the question “are you going to save the silver screen” from Tudor Giurgiu’s campaign, the minister Alexandrescu said “we will save whatever it is still there to save. The silver screen was put into my service in a really deteriorated stage. Don’t expect to do a miracle, I will try to do whatever is left to do”.

BR additionally talked with director Alexandru Belc about the project to find out what will happen with the other stories that his team has discovered for this documentary. “I don’t yet, but for sure it will be made public at some point. There are still over 300 hours of filmed materials, from which a great part was the Piatra Neamt story.”

The premise may be summarized thus. Once the pride of a nation, an effective propaganda machine and a means of educating the masses during the communist regime, Romania’s movie theaters now lie abandoned and forgotten by the public. Of the more than 400 theaters in existence in the early ’90s, fewer than 30 are still functional, making Romania the country with the fewest screens per number of inhabitants in Europe. With this statistics, we only hope to “Save the silver screen”.

The handful of theaters that have survived are not thriving; a passerby may not even realize they are still functional, that someone replaces the posters now and then, that inside there still are people at work, for whom these theaters mean everything. They are the people in the projection room, technicians, managers and usherettes, a world in a dolce far niente state, waiting resignedly for the day when the doors are locked for good.