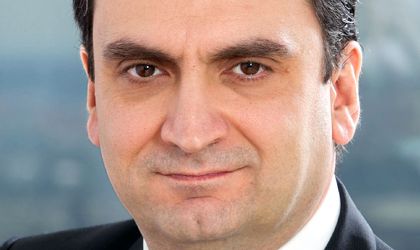 The biggest growth rate in revenues- amounting to a 221 percent hike y-o-y was registered by the ICT solutions.

“The company’s key emphasis on TV and Internet, is reflected in subscribers’ increase, while on the business segment, Romtelecom consolidated its position as an important ICT player”, said Anastasios Tzoulas (in picture), chief financial officer Romania.

The exclusive TV content, especially HD, resulted in a 7.2 percent increase of number of TV subscribers, and a corresponding growth in revenues from TV services of 8.2 percent for Q3 2013 as compared to the same period of last year.

Revenues from Internet services grew by 3.8 percent in Q3 2013, while the number of subscribers also had a positive trend of 4.8 percent growth as compared to Q3 2012.

Cosmote Romania announced total revenues of EUR 116 million for the third quarter of the year, ended September 30, 2013, compared to the same period of last year.

The Pro Forma EBITDA (Earnings Before Interest, Taxes, Depreciation and Amortization) stood at EUR 33 million, down by 3.5 percent compared to Q3 2012.

Cosmote Romania’s total customer base in Romania, including Zapp, counted 6.1 million at the end of September 2013, of which 25.4 percent were postpaid.

Blended ARPU (Average Revenue Per User) increased by 0.7 percent in the first nine months of the year compared to the same period of 2012.

“This quarter marked many significant achievements for Cosmote Romania, such as the EBRD loan signing- which enhanced our resources, so we can pursue the optimal investment plan for our broadband development strategy – or such as the new postpaid portfolio, through which we radically simplified the mobile telephony experience,” said Anastasios Tzoulas, Chief Financial Officer Romania.

Cosmote Romania’s national sales distribution included approximately 510 points of sale across the country at the end of 2013.

Currently, Cosmote is also offering mobile broadband download speeds of up to 43.2 Mbps in 212 cities and over 3,100 areas across Romania, covering over 62.85 percent of the population. Moreover, customers enjoy speeds of up to 21.6 Mbps in HSPA+ technology in 248 cities across the country. Overall, 3G services cover more than 78.36 percent of the Romanian population.