Romania’s Sameday Courier aims to triple its profits this year 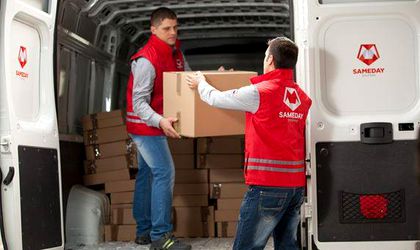 Sameday Courier (SDAY), the first Romanian courier service listed on the Bucharest Stock Exchange AeRO market, announced an increase of 25 percent in revenue for 2015 compared to 2014, reaching RON 8.6 million (as opposed to RON 6.8 million in 2014), according to a company press release.

As for 2016, “for this year we set a goal for total revenues of RON 11 million and a gross profit of RON 1.6 million following investments made in 2015,” says Lucian Baltaru, general performance manager at Sameday Courier. He further added that the company is estimated to reach “a profit margin of 14.5 percent in 2016, given that the normalized profit margin for 2015 was of 8.2 percent.”

Among the investments planned for 2016, “we have in our sights extending operations on the Lokko platform (mobile app for courier services) — where we went over the 50,000 processed orders threshold” but also “hardware investments, in palms (PDAs) and mobile printers,” added Baltaru.

Currently, the market capitalisation of Delivery Solutions SA is of RON 7.6 million, with the price per share at RON 7.6. The company has registered a trading volume of  RON 1.12 million up to now, with a daily average of RON 7,900. The free float (proportion of shares available for trading on the stock market) has exceeded 12 percent.