Romania’s minister of communication: We want the IPO of Telekom to happen, but not at any price 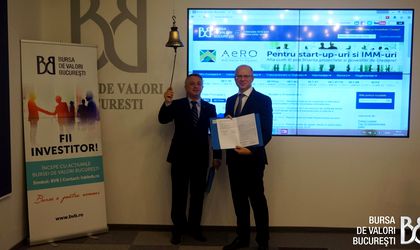 The Bucharest Stock Exchange (BVB) and the Ministry of Cooperation and Information Society (MCSI) have signed on Friday a collaboration protocol and will start a series of programs meant to support SMEs in the IT&C sector. Present at the event, minister of communication Marius Bostan, said the government still supported the IPO of telecom operator Telekom. The state still owns a 45.99 percent in this company. The minister added that the IPO of state-owned postal operator Posta Romana was an “option”.

With total revenues reported by software and IT services companies in Romania going up by 14 percent in 2015 against the previous year, this is a go-to sector for brokers and investors, according to Bostan.

“There are opportunities from big companies that remain to be listed on the BVB, but the highest growth rate will be in this field [IT&C) for the next, I can say, 10-15 years”, he added. Nevertheless, “the traditional banking system doesn’t have an appetite for financing businesses such as software or tech producers,” he maintained, outlining the fact that, in his opinion, finding financing for IT&C start-ups in Romania is difficult at the moment.

The program, which aims to provide IT&C startups with alternative financing possibilities, consists of a series of workshops where ten companies each from six regions of Romania will be pre-selected to present their business and growth histories during pitching sessions.

“Through this program we want to create a bridge between investors and entrepreneurs,” stated Ludwik Sobolewski, BVB general director, during the event.

Each company will receive the support of an authorised consultant and following the pitching session, there will be talks regarding the process of getting listed on the stock exchange, process that the companies in question are not obligated to go through, according to BVB. The prediction is that this part of the new initiative will end by May/June 2016, said Sobolewski.

As for the potential privatization of large state-owned companies such as Telekom, the minister said that “we want the listing to happen” but refrained from commenting on a potential timeline regarding when this would happen. “The purpose is to sell, but we can’t do so at any price, and we haven’t yet settled on the privatization option”, added Bostan.

Regarding Posta Romana, another company whose potential listing on the stock exchange has been a topic for debate, the minister said that it is “an option for Posta Romana”, with the process  to be “started this year but I can’t tell you when the IPO will take place.”

The issue of privatizing Romanian state-owned companies was mentioned last week by both Greg Konieczny, fund manager of Fondul Proprietatea (2011 stock exchange listing), who claimed that “the only way further progress can be achieved is through the listing of new companies on the stock exchange” and by Costin Borc, Minister of the Economy, who said that this year will not be one of “resounding privatization” for the country.