Romania’s government to roll out new taxes in 2014 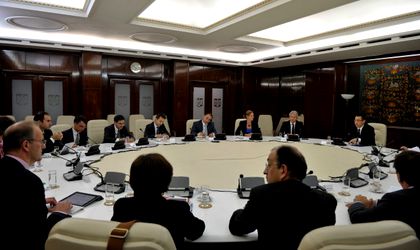 The government announced on Monday a new raft of tax initiatives, following the completion of next year’s budget talks with international lenders of the likes of the IMF and the World Bank.

Authorities want to roll out a new tax for special constructions, such as power grids and operational oil and gas drilling equipment, which are operated by foreign and local utilities, although the amount has not been established yet.

A new excise of EUR 0.7 will apply to each liter of fuel (gasoline or diesel), and the revenues will be put in a special fund designed to finance large infrastructure projects.

The yearly computation of all excises will be made using the inflation rate and not the EUR–RON exchange rate, as was the case up to now. PM Ponta said this will generate more revenue to the budget.

Royalties for all mineral resources, except oil and gas deposits, will be hiked by 25 percent.

Romania will continue the belt tightening and further lower the budget deficit to 2.2 percent of GDP, both in cash and ESA 98 terms.

PM Victor Ponta announced the investment budget will reach 6 percent of GDP next year, to support the estimated economic growth of 2.2 percent.

The government aims to hike the minimum wage to RON 900 next year, a 12.5 percent on this year’s level. The wage is set to go up by RON 50 in January and July.

Although PM Ponta pledged to cut social security contributions for employers by 5 percent in the second half of next year, the IMF said this measure hasn’t been included in next year’s budget.

“The revenues were weaker, and next year there will be additional expenditure for wages, pensions and other investments, so, clearly, to cover these costs you need to prioritize them. This reduction for supporting the labor market was one part, but too soon. I think the moment was not right to assess all the effects,” said Andrea Schaechter, head of the IMF mission in Romania, quoted by Mediafax newswire.