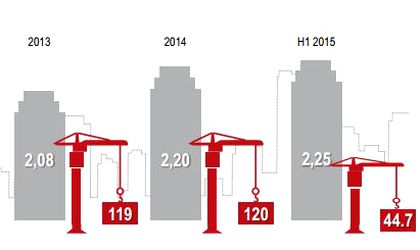 A report by Jones Lang LaSalle (JLL) covering Romania and Bucharest’s property market shows an upward trend based on the country’s economic growth, which in turn led to more solid investments in the market.

Following four consecutive years of economic growth, Romania’s GDP increased by 4.2 percent in Q1 2015, one of the highest values in the EU. The growing trend is expected to continue throughout the rest of 2015 when, according to JP Morgan reports, GDP will increase by 4.2 percent, fuelled mainly by increasing private consumption.

The National Bank of Romania (BNR) decreased the monetary policy rate to 1.75 percent in May, the lowest level recorded for our country. The key rate has been maintained at the same level to date, the National Bank also leaving the minimum reserve requirement ratios for commercial banks’ RON and hard currency liabilities unchanged.

The exchange rate remained very stable over the quarter, oscillating between RON 4.41 and 4.48 for EUR 1.

The inflation went negative in June for the first time in 25 years and BNR representatives expect it to stay in negative territory in the coming three quarters.

Coming off the back of an impressive 2014, when the total investment volume was around EUR 1.15 billion, placing Romania amongst the top investment destinations within CEE after Poland and the Czech Republic, 2015 saw a relatively slow start. The property investment volume for the first half of the year is estimated at approximately EUR 190 million, which is lower than in the same period of 2014.

JLL experts expect the total volume in 2015 to be around EUR 800 million, based on the fact that a number of key office and industrial buildings within Romania are currently in advanced stages of negotiations.

Despite the favourable macroeconomic environment, there is still a major pricing gap between Romania and the main CEE markets, with prime yield levels at 150 – 250 basis points higher than those in Prague and Warsaw. The weight of money and the compression of the yields in markets like Poland and the Czech Republic have prompted more investors to look at Romania which is translating into the highest level of interest since 2008.

The sale of large portfolios of NPLs by banks active in Romania is accelerating in 2015, with an expected nominal transaction volume of up to EUR 5 – 6 billion. The largest portfolio currently on the market consists of a EUR 2.7 billion unpaid loan balance (mostly collateralized by property) or EUR 3.55 billion gross liabilities (including unpaid accrued interest payments, penalties and swap liabilities). It is very likely that many of the underlying assets will be offered for sale in the near future, increasing the supply of residential and secondary commercial product.

JLL is a financial and professional services firm that specializes in commercial real estate services and investment management. It currently hires 58,000 people across 230 corporate offices worldwide, working with clients in more than 80 countries.