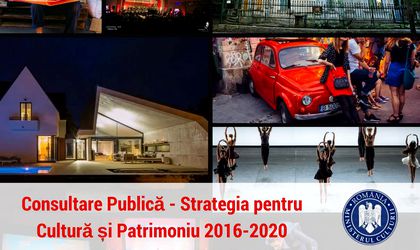 Last week, the Ministry of Culture has opened the public consultation process for the Cultural and National Heritage Strategy 2016-2020. The proposals, suggestions and opinions can be submitted until 23 November, 2016. Up until now, the cultural sector of Romania does not benefit from a strategic document assumed by the government on medium or long term in order to be implemented nationally, regionally and locally by the authorities.

The city capital was in the same situation for 26 years, but after more then two years of negotiations, Bucharest’s authorities have managed to finish the capital’s cultural strategy and presented it just before the announcing of the winner of the European Cultural Capital title.

Read also: Opinion: Bucharest, this “in-visible city” that failed to become Europe’s Cultural Capital | How we got here

The flip side of the coin

From these public documents which can be read on the Ministry of Culture’s website, the National Institute of Statistics shows a painful reality about Romania.

The number of public libraries has decreased with more than 2000 units in the period 2007-2015, while the drop has been noticed both in libraries situated in rural and urban areas.

When it comes to monuments restoration, in 2010 the total amount of money invested was almost RON 50 million for 304 monuments, while in 2015 only 164 received money for their facelift, meaning almost RON 23.5 million.

The cultural glass half full

Also, the National Cultural Fund Administration has financed more and more projects since 2010, when only 83 cultural projects have benefit from the money (almost RON 2 million), while in 2015 the sum was more than doubled (RON 4.7 million) for 115 cultural projects.

Photo courtesy of the Ministry of Culture