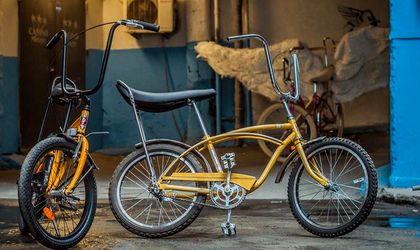 “We are talking about 13 innovative, new models, intended for the whole family. From 2014 to now, we have sold over 5,000 bicycles, but through this new collection we aim to sell 10,000 units this year and, further on, 25,000 bicycles of the new collection,” said Botescu.

Read also: Made in Romania: the facelift of Pegas brand

Last year the founder sold the majority stake in the business to Network One Distribution, a partner who came up with the investment required for this new collection.

In the next three years, Atelierele Pegas target a tenfold increase in the volume of bicycles, up to 25,000 pieces annually and a turnover of EUR 5 million.

From its launch the company has based its whole image on the nostalgia of years passed, with Pegas being the bicycle brand that many of the adults today rode as children. “Using the psychological side of childhood memories nostalgia works even better than a marketing campaign,” says the entrepreneur.

However, Atelierele Pegas is now headed in a new direction, the representative says, with focus on the smart biking segment.

“Pegas is moving towards new technologies. Besides the two smart bike projects we have, the e-bike and hometrainer VR kit, we aim to print 3D bikes in the future and to deal with virtual reality, thus making Pegas become the factory of the future,” he continued.

The local bicycle market is growing by 20 to 30 percent annually, the entrepreneur says, reaching some 400,000 units sold every year. However, we lag behind other countries, mainly due to poorly built infrastructure.