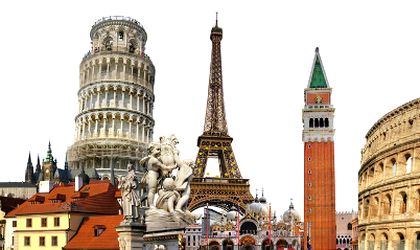 Romanian have chosen Europe as a preferred travel destination for the end of summer vacation, according to a study by eSKY.ro.

The most popular cities for travel in September 2015 are London (9.4 percent), first in the ranking the same month last year, followed by Barcelona (4.36 percent) – with a climb of four places in the top – and Milan (3.90 percent). Romanians’ holidays are divided between European cities with rich history and culture (48.64 percent) and beach destinations (17.24 percent).

For September 2015, the average holiday time rose to 4 days, as compared to 2 days recorded in the same period last year. The average price paid for a vacation was EUR 235 compared to EUR 209 in 2014.

Romanians will spend their holidays in September mainly discovering European cities famous for their cultural heritage. These include Florence and Pisa (Italy), Frankfurt am Main and Koln (Germany), Liverpool and Edinburgh (UK), Vienna (Austria), Zurich (Switzerland) and Prague (Czech Republic).

Following international trends in the discovery of some hitherto underrated cities, Romanian travellers are turning more and more to destinations in the Balkans, Scandinavia and the Baltics. Thus, 2.07 percent of them will spend their holidays at the end of the summer in cities like Belgrade, Stockholm and Vilnius.

In terms of hotel bookings, Romanians paid on average EUR 431 for a stay in September, at hotels of 3, 4 and 5 stars, unlike last year when they chose mainly hostels or hotels of 1 or 2 stars.

eSKY.ro is a travel agency in Romania, with sales exclusively online. It holds 28 percent market share in the online segment sale of tickets by travel agencies in Romania. It is part of the multinational eSKY.PL Group, present in the markets of Poland, Bulgaria, Romania, Brazil and Peru. The company operates on the Romanian market since November 2009.