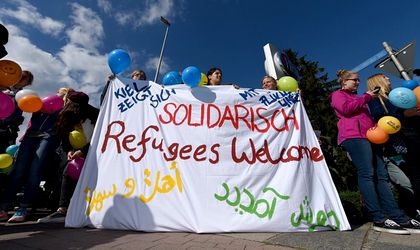 Romanians were polled on the issue of migrants and results came out interestingly contradictory, according to data provided by the Romanian Institute for Evaluation and Strategy (IRES). Although 65 percent of respondents fully or partly agree on Romania’s duty to receive some refugees as an EU member state, only 46 percent would accept them in their neighbourhood, and 42 percent would definitely reject them.

When it comes to the risk of our country being overflown with refugees, over 50 percent (42 percent – low and 15 percent – very low) of Romanians think the risk of an invasion of Middle East and African immigrants is low, with a high share of respondents (70 percent) putting their trust in the army to manage the situation should it get out of control.

Next in line in terms of being trusted by the population to handle a crisis are the gendarmes, with 57 percent, followed by the Romanian Information Services (SRI) with 51 percent and the frontier police with 49 percent. A high level of trust also gather humanity organizations (50 percent), while at the other end of the scale stand the Romanian government (75 percent of respondents trust it little or not at all), local authorities (67 percent) and the Supreme Council of Defence (54 percent).

Romanians are mostly aware of the immigration crisis at the European Union border, with 83 percent of respondents saying they know about it.

As regards the reasons behind the present exodus, 51 percent of respondents mentioned the wars and 41 percent poverty; 67 percent blame the governments of the source countries, 54 percent the Islamic State terrorists, 36 percent the United States, 29 percent the EU, 28 percent Russia, and 24 percent Israel.

Romania’s preparedness for an immigration crisis is very poor according to 35 percent of respondents, poor for 38 percent, and adequate for 21 percent. Europe, in turn, is better equipped for such a situation in respondents’ opinions, with 60 percent saying it is prepared (21 percent totally agree and 39 percent partially agree) and only 35 percent disagreeing (22 percent partially and 13 percent totally).

As many as 58 percent of Romanians think refugees are entitled to choose their country of destination, though 48 percent of respondents would not agree with migrants using Romania as a country of transition. The same percent would allow for it, though.

Over half of respondents (57 percent) totally agree the responsibility of managing this crisis should be divided among member states, with 22 percent only partially agreeing, while 12 percent partially and 6 percent fully disagree.

In line with the idea of sharing responsibility, 65 percent of respondents agree (32 percent totally and 33 percent partially) with Romania taking in a share of migrants, though 42 percent of them said they would not want refugees to stay in their locality.

Respondents think of all member states Germany will take the hardest blow due to the crisis (55 percent), followed by France (25 percent) and Romania (23 percent). At the other end are Sweden, Belgium and Macedonia (3 percent each) and Denmark and Poland (2 percent each).

In terms of safety, 64 percent of Romanians believe the European Union becomes a less safe space with the migrants’ arrival, while 72 percent feel that the risk of terrorist attacks from the Islamic State will grow.

The research was commissioned by Digi 24 TV; IRES carried out computer-assisted telephone interviews from August 28 to 31 on a stratified random sample of 1,482 persons over 18 years of age, representative on a national level.