Romanians make up 47 pct of Amethyst Radiotherapy patients in 2015 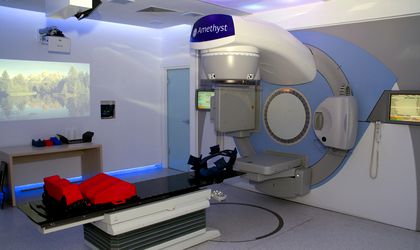 In 2015, Amethyst Radiotherapy, a private cancer treatment institution focused on radiation oncology operating 6 centers in France, Romania, and Poland, had a total of 200,000 treatments for approximately 5,900 patients, 47 percent of which where in its Romanian clinic, according to a company press release.

Modern radiotherapy is currently used in Europe for “approximately 70 percent of those diagnosed with cancer”, but when looking at Romania specifically the rate falls to 25 percent “because of the lack of infrastructure and a technical platform adapted to existent needs”, reports Amethyst.

The most common types of cancers treated by Amethyst Radiotherapy were breast cancer (29 percent), prostate (25 percent), nasopharyngeal and other areas (18 percent), gynaecological (17 percent), and lung (10 percent).

“Both in Romania, and worldwide, cancer is the second most prevalent cause of mortality. Due to limited access to screening programs for early detection of this disease, patients often come in with very advanced stages of it, which reduces their recovery chances,” said Gabriel Kacso, medical director with Amethyst Radiotherapy Romania. Furthermore, “The IMRT VMAT technology present in the Amethyst radiotherapy machine represents one of the most successful radiotherapy methods available in the world,” he added.

At the European level, Romania ranks among the countries where radiation therapy equipment is the least common relative to population size, next to Estonia, Latvia and Portugal, according to statistics from Eurostat. On the other end of the spectrum are Belgium, Denmark and Slovakia with the highest rates.

Romania was, however, among the countries with the largest decreases in the frequency of partial or total mastectomies between 2009 and 2013 relative to population, together with Poland, according to the latest available statistical data from Eurostat. During the same period, Romania reported “particularly large increases” in terms of pulmectomies and increases between 10 and 20 percent were seen for colectomies, further adds Eurostat.