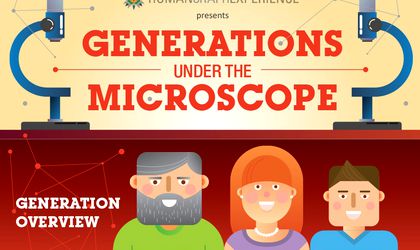 Starcom Romania presents “Generations under the Microscope”, an infographic in which identifies the common points and differences when it comes of media consumption between three generations: Baby Boomers (people aged now 49 – 67 y.o.), Generation X (aged 33-48 y.o.) and Generation Y (14-32 y.o).

The online shopping is of interest for all ages, including Baby Boomers, as they have the same interest for online products like the young generations, although they use internet less.

The consumption of media differs between the three generations. TV watching is active and planned during the entire day for Baby Boomers, qualitative and selective for Generation X and set as a background for Generation Y (that is characterized strongly by multitasking).

Newspapers and magazines are consumed by the representatives of all three Generations, with differences appearing when it comes of subjects of interest: news and food recipes for more mature generations and fashion, beauty, horoscope, football and internet for Generation Y. Generation Y listens radio for the music, Baby Boomers keep the ear open for news, while Generation X is interested in both news and music when listening to the radio.