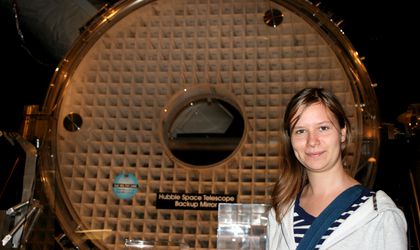 Romanian Aurora Simionescu discovered her passion for astrophysics after reading the book Astronomy: The Structure of the Universe, by William J. Kaufmann, which her mother had bought from a second hand store. She is currently the only female Romanian scientist working for NASA, and will soon move to Tokyo, after being recruited by the Japanese Space Agency to work on a satellite that will be launched into space.

What did you want to be before your mother gave you the book?

I was in 12th grade and the only thing I knew at the time was that I wanted to do something involving physics, because I had participated in the national physics Olympiad, and I knew I was good at it. I was considering studying medicine or automatics, but none of these greatly appealed to me. This was probably also the reason why the book appealed to me so much, because I had finally found something that sparked my interest.

How were you recruited?

First I applied to the Bremen International Faculty where I was admitted with a full scholarship, so it was an offer I could not turn down. The faculty offered specialization in astrophysics, which probably didn’t exist in Romania at the time. After that, my teachers encouraged me to take my PhD. I took it at the Max Planck Physics Institute in Munich and after I finished, I applied for the scholarship at NASA which I fortunately received.

What is the discovery you are most proud of?

My best-known discovery is a filament in the universe. Matter is distributed on a large scale in the universe as a cosmic web, which includes clusters and filaments that connect them. These clusters are the densest parts of the universe, where very many galaxies are clustered together. So, my best known discovery is the discovery in X-rays of a filament that connects two such clusters. Before, we knew that such filaments must emit in X-rays, but this emission had not been detected until 2008, when we published this result.

However, the discovery I am most proud of is more recent, dating from 2011, when I observed with the help of a Japanese satellite a cluster of galaxies. Before, the emission in X-rays from these clusters could only be seen in the center, where the matter is denser. But we managed to measure the properties of the X-rays emission not only in the center but also at the margin of this cluster of galaxies.

The discovery of the filament was a project to which I contributed but this one was mainly my project and was published in Science magazine last year.

Are there many women scientists at NASA?

I don’t know exactly what the split between the sexes is. I would say somewhere around 30 percent women and 70 percent men. But it also depends on nationality. Very many of the women astronomers are from Italy.

Do you have Romanian colleagues?

I don’t have Romanian colleagues at NASA but I know two other female Romanian scientists who work in astrophysics. One of them, Anca Constantin, was at Harvard and she teaches at the University of Virginia, I think. The second one, Laura Barzan, was at Ohio and, last time I heard, she was in the Netherlands, in Leiden.

What is a regular day in your life like?

I don’t think it is very different from what others do. I go to work in the morning, I switch on my computer. In fact I arrive at work rather late. My office is in Stanford, California. There is a joke that, “Astronomers do it at night.” We are not early birds. I arrive at the office between 10 and 11 o’clock in the morning and, depending on how much work I have to do and how much inspiration I have, I stay there until 6 or 8 pm. Most of the time I analyze data and do programming on the computer. Currently, I am also coordinating some PhD students. I am not a professor yet but some of my ideas turned into projects that these students are working on. Officially, they are the students of my teacher, Stanford professor Steve Allen, who is one of the top experts in cosmology, but I guide and coordinate them.

How were you recruited by the Japanese Space Agency?

Actually, I am already part of the team working on the launch of this satellite. It is an international team of about 200 people. This is a collaboration between NASA and the Japanese Space Agency, the latter being the main financer. To get this position in Japan, I submitted my application, just as with NASA, and I received an offer. In fact, I will be spending half of my time in Japan and the other half at Stanford, because they are collaborating on this project. I will be the link between the two institutes. In Japan, I will be working at the headquarters of the Japanese Space Agency.

What will your responsibilities be?

The main thing to figure out is what this satellite will observe when it is launched. Each satellite goes through a performance verification phase when we must check the main targets the satellite will observe to fully prove its observation capabilities. I will probably be in charge of simulating these observations in advance to find the most advantageous target to study, which will produce the most interesting scientific results, and how much observation time we need to measure the features we are interested in. Most of the satellite is already built, and now we are in the stage of integrating the components. It is built for a certain capability: this is a spectral resolution that is between 100 and 1,000 times better than the spectral resolution of satellites in the past. We now have to decide what the most interesting targets are.

Do you find it challenging to move to a new environment?

Each time I move, I anticipate that it will be hard for me to adapt and I wonder if I will manage to find a group of such extraordinary friends. Most of my friends are European, and there are also a few Americans. But from my own experience, every time I have taken this step, it was very easy for me to adjust. I try not to let fear get the better of me.

Do you still have time for hobbies?

I have many hobbies. Sport is very important. I practice ballroom dancing at competitive level. In the latest competition my partner and I qualified for the national stage of the dance event.