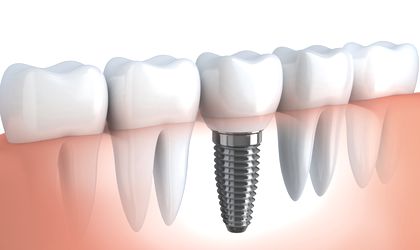 Two researchers from Cluj Napoca have been working together since 2011 on the creation of a dental implant that emulates the mobility of a natural tooth, writes Agerpres.

Stomatologist Manea Avram and Professor Dumitru Pop from the Department of Mechanical Systems Engineering of the Cluj Napoca Technical University came from opposite ends of the practice spectrum to work on a project called “Experimental dental implant that reproduces the physiological mobility of the teeth”.

The two researchers explained that although the idea is not new and other attempts have been made to implement it, no other valid implant models with near physiological mobility are known.

The implant invented by the two Cluj-based researchers has an appearance highly similar with other concepts and is basically made of the customary specific titanium alloy — but it’s its inner structure that differs. Basically, the physiological mobility is the result of a new tooth scheme, but also of an elastic material that allows longitudinal and lateral micromovement.

The invention has been registered, patented and even awarded, but has still a long time to go until its release on the market, requiring further costly research, which is likely to last another few years.