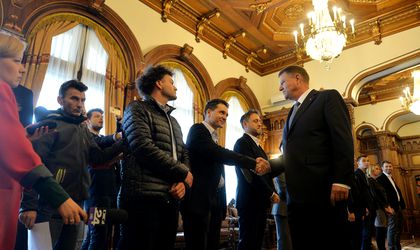 Consultations were held today between President Klaus Iohannis and representatives of the civil society following recent protests taking place in the country as a reaction to a nightclub fire in Bucharest that killed 32, according to local media reports. This is for the first time in the history of Romanian democracy that the President has promised to consult civil society. Following prime minister Victor Ponta’s resignation on Wednesday, President Iohannis has invited civil society representatives to consultations that will be held throughout the following days before a new prime minister will be appointed. The consultations come as a result of the President’s declaration that he will take into account the protesters’ grievances.

“This is an atypical meeting because special circumstances produce special results; that is my hope”, stated President Iohannis at the beginning of the first consultation with civil society representatives, according to Agerpres. “I believed that, in this situation, when the street played a decisive role, when civil society formulated demands, requests, specific , it was very important to have this meeting”, he also added.

Several of those proposed among the 5,520 messages received at the consultari@presidency.ro e-mail address and from which the above selection was made, posted on their Facebook pages reactions towards the consultations.

“Yesterday, I was flooded with hundreds of proposals on my e-mail, phone or Facebook page to become the ‘voice of the street’ for the consultations announced by Cotroceni”, wrote Tudor Chirila, Romanian artist.

Adrian Despot also posted on his Facebook page regarding the consultations just hours before he was chosen as a representative. “My participation at the consultations as representative would be nothing else but another improvisation. I have neither the skills nor the knowhow necessary for something like this”, wrote Despot earlier today. “I still believe that I am not the right person but, in the spirit of respecting the democracy and its symbols, I will be there”, he posted at 12:50 regarding his invitation to the Cotroceni Palace.